The week had started well out on Rona, despite a breezy wet Saturday changeover, our guests got on and off no problem. The rain stopped at mid day and the sun came out. It did not last long though. For the last couple of days it has been a bit crazy with ‘October Type’ gales and Claire with one day left of her challenge, clinging on.

Ed and Stella en Route to the Hebridies

Ed and Stella who were in the Escape house had had a great week and were heading to Harris for another week of ‘glorious’ weather. Looking out the window here the prospects do not look too good for them further west!!!!! All day it blew and rained quite a bit, not enough to spoil the day but just not summer. Late in the day we got a call from Dan (MV Stardust) to tell us a party was heading to Rona, look out.

The boat duly arrived with a very happy birthday girl and pals. The weather certainly did not dampen their spirits and with the help of a bottle of Prosecco or three Catriona blew out the candles on her birthday cake and then they very quickly headed off although they were threatening to come back one day, soon!!

Wallace our stalker had come over on the Saturday ferry with his partner Lorna and the rest of this weeks guests. He was (as always) keen to get out to see the deer. We had not managed our count this year what with the weather and a certain wedding, so we were keen to have a look around the areas we had not been getting out to. Sunday morning early we headed off North to come back into the wind. We went by boat and it was a successful morning. We saw plenty deer and some very good stags. After a pretty exhausting day we were keen to have a quiet dinner and film up in the cabin, the new rule is to take all the ‘funny’ bottles that lurk in the back of the drink cabinet up to the cabin and slowly try them. A few strange brews and then the usual suspects made for a lively film night!!!!!!

Every Picture Tells a Story.

The lemon gin went down particularly well with the occasional snore being heard later (it was not a particularly good film). Next day it was Ed’s birthday, The Mason family who are in Escape were celebrating their son’s birthday and I was amazed to see that he had been given a Ross County shirt (they are from Middlesborough) for his birthday present. We had an idea for a wee present from Rona, more later. Turns out they also holiday at Evanton and go as much as trhey can to see ‘The County’!!!! Their Scottish Team.

We had a bag of excess sweets, so Ed scored for that, the sun had come out and all in all it was a good day. We had a text from Cat’ Orca to say they were on their way, could they have trhe mooring, which was just in time as the brakes of the jeep were playing up and Steve being a (retired) mechanic was just the man.

Cat’ Orca and its Mechanic

They had had a good sail up from Plockton but reported that there were hardly any boats about, this is usually one of our busiest weeks and so far we have had three yachts in this week. No wonder with Stornoway Coastguard giving out gale warning after gale warning. 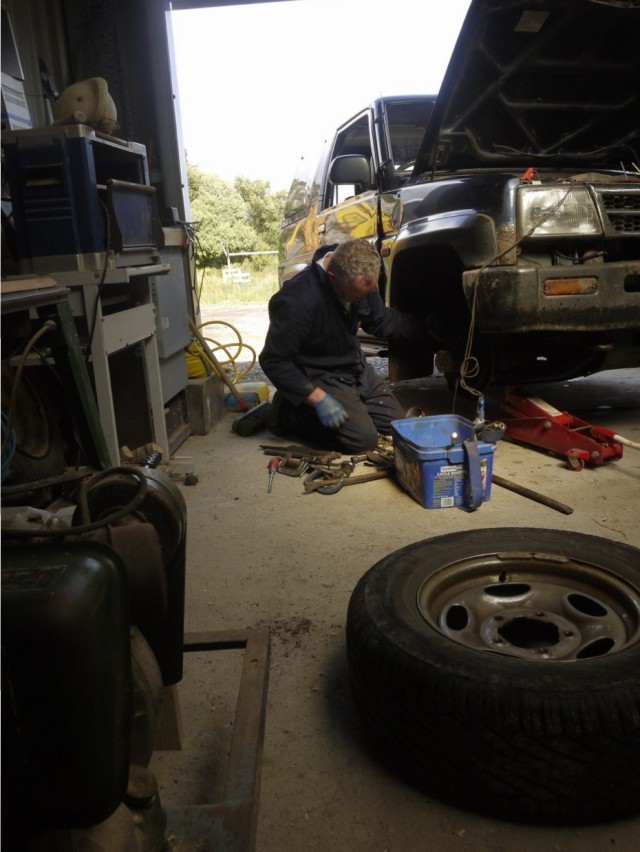 Should Have Been Stalking

I would have preferred to be out with Wallace on the hill instead of being apprentice mechanic, but needs must, I hung about with Steve to find the tools he needed. And to offer advice of course!!!

The brake pad we had found on the road when my sisters man Steve was here and thought was off the JCB was actually from the Jeep. The piston in the caliper was now a funny shape unfortunately. But with expert engineering Steve got it working and we hatched a plan to weld one of the motorbike pads onto the old pad (needs must). We are back on the road for the time being.

As usual we had Steve and his wife Fiona up for tea and a wee dram but in between it all L had had the idea that we should print out some cinema tickets as an extra present for Ed. As it was a pretty horrible day they were very happy to be invited over to the cabin to watch films of their choice, at half time in between The Bourne Identity and Mission Impossible we took up burgers and chips, Ed and his brother Seth were well made up. 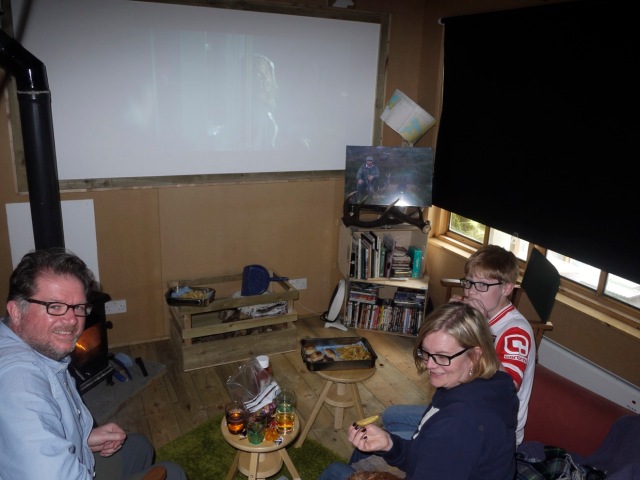 Summer in the cabin with the film on, the fire, nice and cosy with a 30 mph wind howling outside felt more like a day in October, it certainly feels very wrong.

Poor Castaway Claire has no such luxuries, maybe tomorrow.

2 Responses to One Day left