Back on Rona after 4 days in Inverness shopping, great!! The trip away was fine, shops not too busy and the weather was good. It all helps to get into the Xmas spirit. But once home there was a lot to do, especially with the forecasts looking grim for this week and so it is.

This pic’ just about sums it up, from the upstairs window and it was with hesitation we went out to feed sheep and hens on Tuesday morning.

Friday morning started pretty much settled but the big banks of cloud were scudding through with a promise of wild weather. The odd bursts of sun gave the harbour an autumnal feel. The deer are coming down when I shout the sheep and the lambs are having a real hard time feeding when Julie arrives. 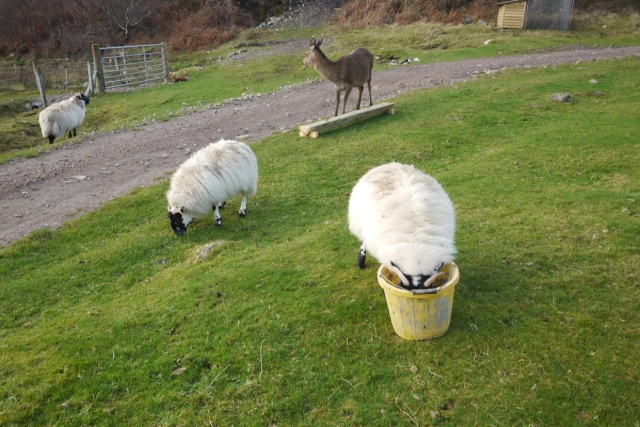 Out Of My Box

She very quickly evicts the two lambs that are feeding so a diversionary regime is in place. We were having dinner that day and Julie was hanging about, Lorraine spotted the Great Tit feeding on her ‘beasties’. Irene got a cracking picture of her with the Great tit on her nose. But we’ve only seen it feeding on other parts of her anatomy. Julie seems to freeze when the bird is at work, I guess it is getting ticks and the odd ked, but it is quite strange to see Julie frozen to the spot when this happens.

On the subject of deer, when we were away we visited Stuart Jeffries up at Strathconon. Stuart is preparing  ‘Eric’s’ antlers and head for us to mount him up at the cabin. It was a nostalgic run up the glen as I had not been there for years and it was interesting to see the changes, it seems the properties are in good order with a busy looking school, amazing.

A Good End to the Week

The weather had been building since the weekend with quite a few hail showers about but still , in between the showers it was still ok to work away outside.

The sun was shining last weekend so I took advantage and concreted three strainer posts into the peat then put out the line wire to try and finish the fence from West to East.

Last thing, I drilled three holes into the Rona rock (very hard long slow process) for the wires on the sea end of the new fence. Running out of time I had to dash over to Dry Harbour to check the houses before the wind arrived and pick up a paving slab for the new cabin stove.

On the way back more showers were appearing and I could see it would not be long before the ‘weather bomb’ arrived. The isobar chart was certainly a very depressed sight, it looked like the whole country was going to get their share, not just us, as usual. So before we got blown away we thought we should have a movie and having bought a few in Inverness we had a choice, Captain Phillips won and a riveting film it was. Tom Hanks at his best. Quite scary and we will have to watch now for pirates on our trips to Portree!!!!!!

Lorraine wanted to give 12 years a slave a miss, too depressing she said. We’ll keep it for after Xmas when we are properly depressed.

Calum and Irene painted the utility room when we were away and I hung up the barometer. It fell off the wall many years ago and because it was a present we just hung it up but did not pay much attention to it. I was telling Lorraine that it hardly ever seems to go above rain, I said it must be broken. But the other day I noticed it does actually move, it is possibly just because it always seems to be raining when I look at it. It is certainly true to form to-day.

When you are in the house and it is shaking with the thunder above us, the lightning flashing, you certainly feel for the animals. They have no comprehension I guess of what is happening and very quickly they feel danger and they all group together and go into the middle of the field. Looking about for the wolf I think!! After the noise and flashes the heaviest of hail stone shower followed and even Julie who was in the sheep’s trough took off.

We have to be grateful that, out here, we have a substantial cosy house and ‘at the moment’ everything is working and behaving itself. Stuck indoors with the fire full blast, it is good to have a bit of time to experiment with the cooking. With a deep freeze full of summer produce we have had a few ideas and it is good not to be feeding the 5000 and rushing about. So on stormy days ‘The Covent Garden Soup Book’, an old one is out and it is soup time with some weird and wonderful combinations.

Tip: the we bits of cheese in the soup are I think a ‘Port Salut’ type cheese from Lidl. It does not say ‘Port Salut, but looks the same and it tastes so much better, plus it is of course cheaper, try some. Saint Paulin cheese.