Wednesday Morning and the Master stag has now decided to start rutting outside the Lodge. It is 9 am and I’m catching up on the blog. I was out early thinking it would be a good sunrise and to have a look for deer. The morning is frosty, blue skies now and very bright. I have seen quite a few deer, a lot of young stags and of the master walking up the road on the way to Dry Harbour. But by the time I came home he was over the hill and roaring out the back of the Lodge. And still is!!!!

The sunrise was clear and quick, without some cloud it was not very red but it did throw a fantastic light on the Trotternish Ridge. 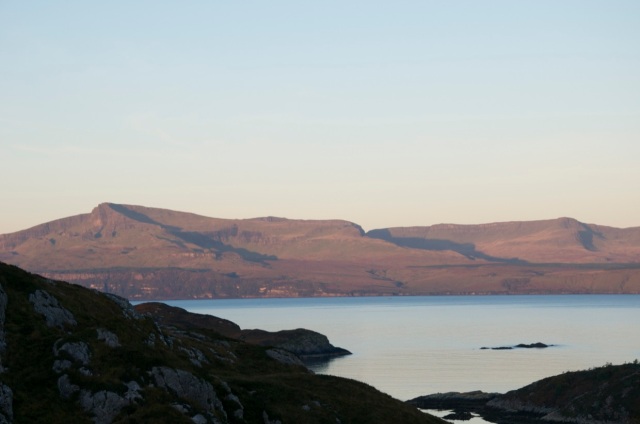 The last couple of weeks were quite full, yesterday after recovering slightly from a full cold I thought, it is calm, there is a Tup sale next week in Portree so why not get the tup over. Richard the tups previous owner had offered to take him to the sale but a blown back axle put paid to that. Then I called Caley over at Stoer and he offered to come and collect. So a mad rush and by good fortune the tup was in the boat and we were on our way. 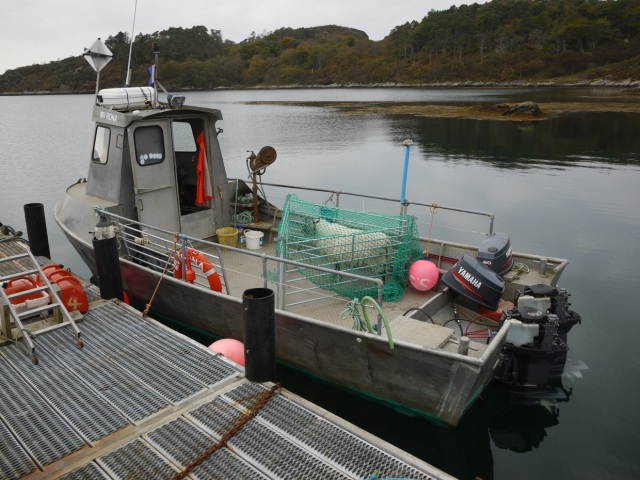 The tup behaved, I got a bit of shopping, gave the tourists a few photos, much to their amusement and headed home around 5ish. The day was overcast but on the way home the sun broke through. I had a we errand to attend to on the way home. Hugh had organised some scaffold boards for me to pick up at my nearest neighbour Paul: Life at the End of the Road .

Himself and Ross, his son met me which was good with the tide dropping. We had a chat and quick catch up, seems Paul is as busy or maybe busier than ourselves.

I took advantage of the calm evening and went to the West side to see how many of our sheep were now resident on the cliffs and much to my disappointment I saw 6, I must chase them in.

Last weekend we had Dode, Dougie, Lorna and Bruce up for a visit. There would be a bit of diving, work and play. Bruce was going to have a walk to look round the regeneration and deer impact, Dode and Dougie were going for a dive but I was taking advantage of their welding and motorbike repair skills first. 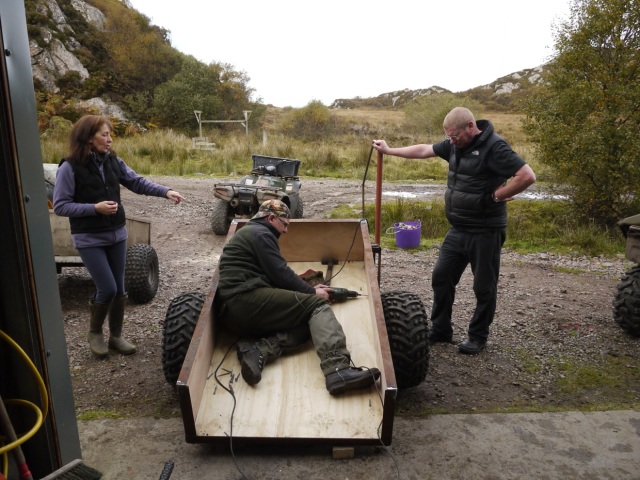 Both guys are engineers to trade, so, why waste the resource!! A couple of bits of angle and some new boards, the old trailer (which was here before me) was back in service. Last week the seat of the quad came loose and when I tried to put it back I found that not only had the battery box and wiring parted company with the body, there were some cracks in the chassis. Not a surprise given the nature of the terrain and all of our ATV’s having sufferred the same. 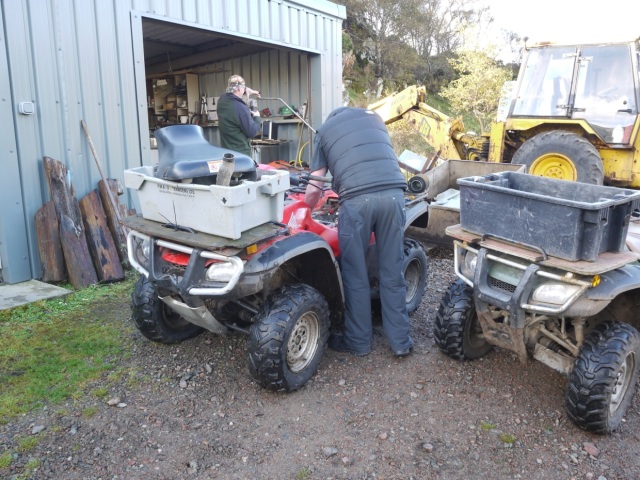 After a lot of ingenuity on how to make a purse out of a pig’s ear,  we headed out for a half hour dive and some scallops.

Looks Pretty Cold to me.

I took Bruce a run on the bike looking for stags ( a must at this time just to see what is on the Island). The night came in quick but no red sunset although it was quite dramatic and had a promise of a good day the next day.

Sunday we had a good sunny start and after a lazy morning with a visit from Kenny and Gemma with some walkers expected. We hung about until they arrived. They dropped off some welcome prawns and after a chat we headed off for a dive. We had heard of some Basking Sharks about so we said we would keep an eye out and sure enough we spotted one right outside the harbour, a few hundred yards later we saw another then round the East side yet another. Meanwhile Kenny had left and we radioed to tell him where they were. They quickly found them and had a good view. We then got a call to tell us that there were 4 Sea Eagles lined up on Eilean Tighe. We had look and sure enough here were 4 birds lined up like sentries on top of the Island. All of a sudden they took off and at one stage the four of them were circling over the Sound. Very nice to see as long as they stay away from the hens and lambs!!

The First Basking Shark This Year

All too soon the guys had to leave and the boat on Monday morning arrived quite sharp.

They had a wonderful sail back with more Sea Eagles, Porpoises and glorious sunshine all the way.

Back to to-day: The sun is splitting the sky, that is the first update more later on last weeks events. The stag has stopped roaring for the day and I need to get on………..