The weather has finally broken. After weeks of glorious sunshine we are straight into Autumnal (gales), well it is the Equinox after all. 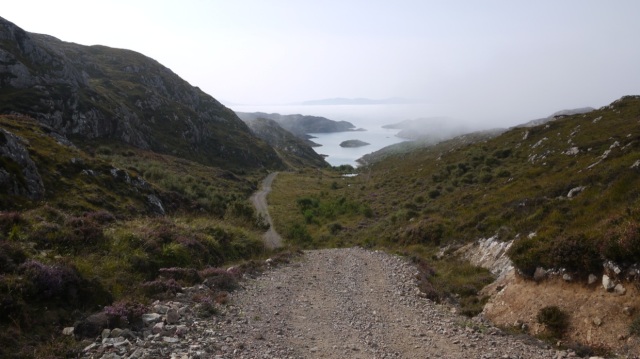 We came home from a quick Inverness visit to see my new grandson to glorious weather. The trip back was in clear blue skies, Wednesday started the same but Thursday last week was a different story. wall to wall fog. Even the semi-tame goose was disorientated. I got to the top of the hill and here it was in the middle of the road sleeping. It got a rude awakening and flew off to the East side.

Kenny had been in touch to say he was coming to Rona with a group from Shieldaig but I thought he would have cancelled. Not a chance, he arrived out of the fog at the usual time, despite issues with the radar. 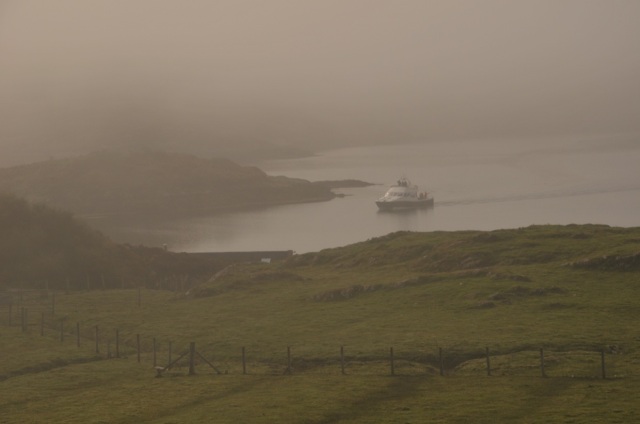 Feeling Their Way In!

The fog cleared about ten minutes after arrival and the visitors had a sunny couple of hours on Rona, but as they were gearing up to leave the fog came back. Next day was much the same but Kenny came back on a jolly to sort out holiday plans and to have a long overdue lunch together, very enjoyable too.

Hard Work It Is Too.

Before you knew it the referendum was over and it was back to normal with a Saturday change over.  The gang came over early from Dry Harbour as there were no guests coming out and Pam and Kevin could do with a quick turn around. As we were loading the boat, Nicola spotted a bird inside one of the creels. It turned out to be a young Sparrowhawk. It was the only creel (on the pier) left shut and a lesson never to leave them closed on land. They are a magnet to birds who often get stuck. This one was lucky though. It flew off with no problem and we saw it later that day at Dry Harbour. 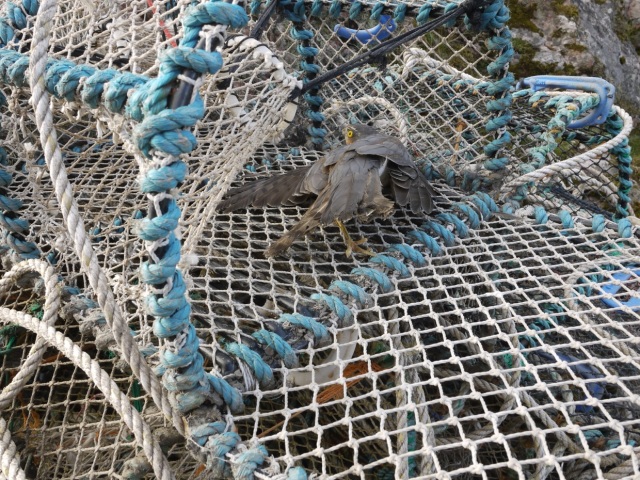 The MV Spindrift was definitely having its last trip before departing for southern waters to change to a new boat. We were sorry to see it go but fingers crossed for the new one……………. 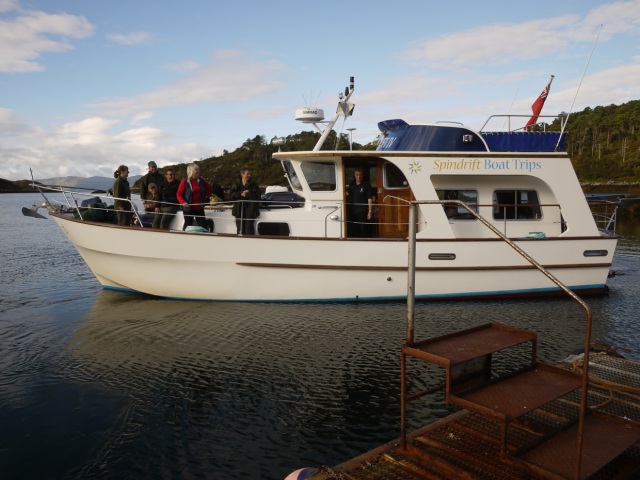 We went to tidy up at the cottages in the afternoon but there was not a lot to tidy, just a much appreciated clean couple of cottages this week and a flower arrangement.

Sunday I took a long walk North looking for the missing stags. I saw two, but not a lot else. They seem to be keeping to the trees for sure. I went right up to the North West corner and came back to the Loch. It is not often we see the lighthouse from this angle. 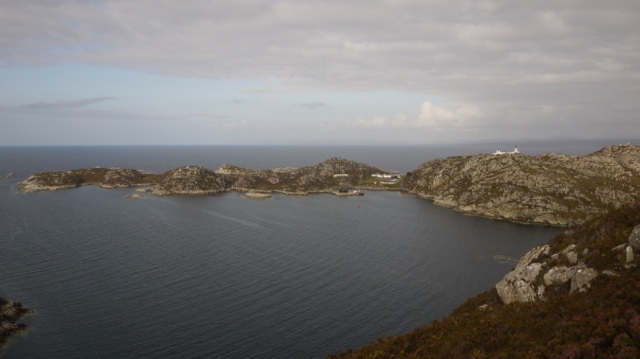 Looking North to Gairloch the sea was calm and it was quite a good day. I have been out a few times since but I cannot find many mature stags, plenty deer but not too many with decent  antlers. Only Eric, twice, although last nights Eric looked younger than the one I saw an hour ago at Dry Harbour. Last night the stag I saw looked young, clean and the head was similar to ‘Eric’s’. Tonight’s Eric looked blacker (he had been wallowing) bigger and the head looked much heavier. Perhaps it was the light.  Maybe, just maybe there are in fact two nearly the same. We will see.

Yesterday it was back to normal in the camp work wise. Lots to catch up on but mainly fiddly jobs. The trailer needed the bearings tightened and a new floor but bearings first. A quick grease and some packing washers and hey ho, sorted for a wee while.

The mink cull continues, Marc our DH visitor caught three in the traps we set lat week. I made a couple of new ones and set them. But nothing yet around the hen pen and shore in front of the Lodge. A check on the generators and the DH one needed an oil/filter change then back to Big Harbour to try the JCB and of course it had a flat battery, seems it is losing the charge. I put the battery on charge and then spent the rest of the afternoon looking for lamb 25 who went awol the night before.

To-day I got the Tirfor winch out to look to taking the windmills down for their pre-winter check. That’s when I remembered I’d broken the release lever last time I used it. Back to the house a quick check on the internet and there was one on ebay. But by the time I would arrange a courier, the cost was getting nearer a new one so that’s the new plan. We’ll get a new one next month delivered to Rona by John, my pal who lives in Dudley (The Black Country). It just so happens that the dealer I found on the internet is two miles from where he stays and as he is coming up on holiday, what could be better.

I am just in (Tuesday night) and would you believe it,  a Skye Yacht boat is in the harbour, I think number 463? Hardy holidaymakers!! It is a poor night out there and black as coal.

2 Responses to Autumn is Definitely Underway.