We are house bound to-day (Thursday) the sunny weather has disappeared and has been replaced with a colder SW wind and of course that brings rain. The yachts are still coming but it has dropped off, I guess there is no fun in sailing in little wind and grey drizzle. We have a lot of Dutch, Scandinavians and French this year and they are very enthusiastic about the scenery but not so much about the rain. Three yachts in from Europe as I start this blog.

I found these guys from Holland in the forest whilst I was looking for the escape route that the sheep have found. They were enjoying the walks and had come prepared for Scottish rain. They were very pleased to be in the West away from the millions of people in the Netherlands.

Monday after last weeks weather promised a better day but there were showers but with a sunny end to the day, a few yachts came in but they were having anchoring problems. One yachtsman arrived at the door asking what was wrong with the harbour, he could not get his anchor to hold. Seems he had too short a length of chain out. I told him I had never anchored a yacht in my life but that he should put at least 25 if not 30 m of chain out if it was going to be windy. That is what he did and he spend a better night on board with the anchor holding. There is always much discussions about anchoring here at Big Harbour, by the time August comes I guess the sea bed resembles a ploughed field. The loose mud not offering good grip. Thankfully no one has come to grief this year.

Next day I asked Mike (from the cottages) if he wanted to go stalking on Tuesday, it was damp but warm. He grabbed the opportunity as I had mentioned going by the Danish Princes grave. We had a good two hour walk, saw some deer but not the right ones and passed the path that Calum strimmed last week. It looked pretty impressive from the West side of the loch and our visitors this week have all been pleased with it, well done. 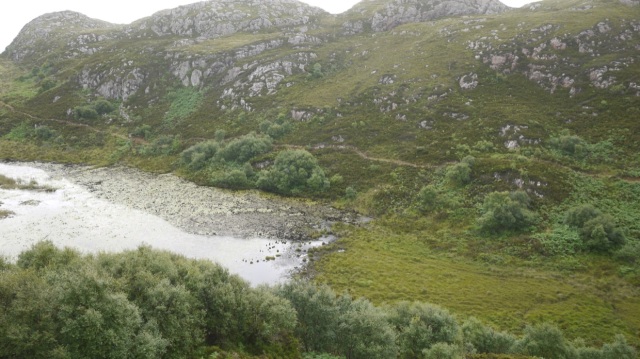 We were just heading back to Dry Harbour and I was telling Mike how on occasion I would walk all day just to find a deer near the vehicle of just before I would return to the house and that is just what happened. Out on the flat above the cottages at Dry Harbour, a few deer were minding their own business, when we arrived. But with the rush to get off a shot, I missed!! Deer 1, Me 0. Ah well there was always tomorrow. 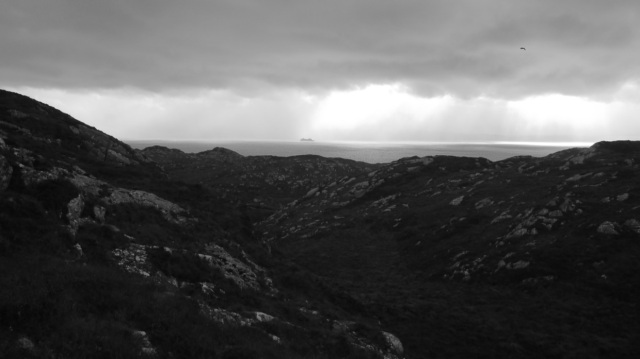 We got back to the cottages around 6ish and the sun broke through the mist to reveal the cruise ship that had been in Portree, passing en route to the next destination, probably Stornoway.

Next day, Wednesday I decided to do a deer assessment on foot, all day. I wanted to see how the deer calves were doing. I had not seen many this year but they lie pretty low when they are first born or until they are quite mobile. I was not disappointed. As I was walking I could not believe the amount of dragon flies, they were everywhere, the weather must be ideal for them. So many in fact you could easily catch them. After a whole day walking the Island I saw quite a few calves but also a lot of female followers without calves. Whatever the reason for that, they may be later in maturing. Or they may be big two year olds, who knows. But the population growth is not huge this year so a re-assessment of cull figures may be in order, we will see. After all the walking it was nice to get invited over to Dry Harbour at night for dinner and we were not disappointed. A very well prepared meal awaited us and of course a drink or two.

Dinner is Served, in Skyescape.

The forecast for to-day was pretty iffy so we decided to have a longer lie and then go out tonight for a stalk. As I lifted the blinds this morning I found quite a few deer messing about in front of the house and of course it was just starting to rain.

As soon as I opened the window to take a photo, they were looking, listening and getting ready for off. A quick couple of photos and they were gone.

It has rained all day and the sheep have disappeared (yet again) I have been over to DH to see if they are there but no sign of them. On my way back I did see yet another calf standing in the rain beside a few trees. Here was her Mother lying down, quite cosy under the branches, chewing the cud.

The rain looks like it may be passing, fingers crossed. We have now 5 yachts in and a motor boat, they do  look pretty wet.