I will Look In Your House

It is quite difficult to describe this blogs topic but I’ll try. The visitors of which there are many this year . To date 288 yacht night visits as opposed to 238 this day last year (that was on Friday last, now over 300!!) It does not seem too busy in comparison and that may be due to many things. The weather to-day is fantastic and due to continue. 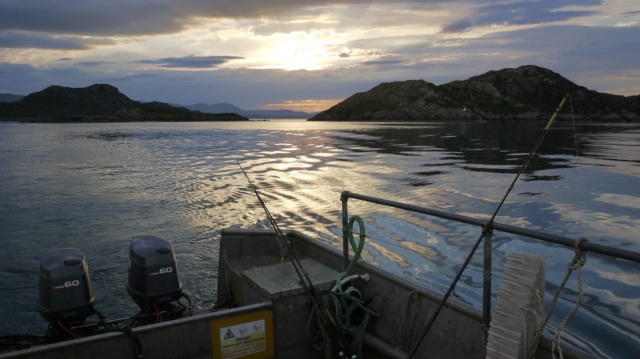 Fishing At kyle Rona End of the Day

This morning a Dutch couple came to the garden, they chatted, then when they had finished the lady said ‘I will now look in the house” to which I replied no you wont!! It seems that somewhere there is a thought that we are a hotel, pub, restaurant or visitors centre, not so. This is our house. Please give us some space, I said. I guess since we have showers and sell produce that is the reason but what possible interest would anyone have peering in the windows or just walking in to have a ‘look’. Would you do this at home?

We have had many tourists/boat visitors beating a path to the door looking for the restaurant!! We think somewhere an article has been published saying we do food and this has been translated as we have a restaurant!!!! Maybe, just maybe one day.

Anyway back to the past week. 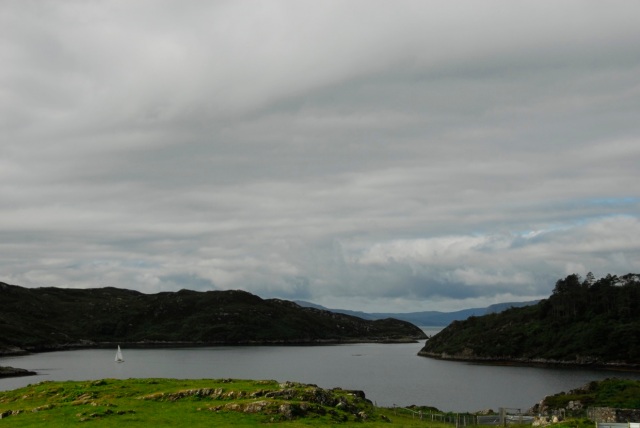 Sunday a week ago it started to go grey and by evening when this wee dinghy came in it was midgie hell, they camped across the bay but we did not see them. They left next morning and I think Tuesday we heard the coastgaurd sending out a message for one of the fishfarm boats to go and see if they were all right. Someone spotted them in a little difficulty in the strong wind/higher seas, but we heard no more so I guess they were ok.

Calum had arrived Friday night to get on with the path strimming up North, I was heading over with some fuel when the geese popped out of the ditch and started running up the road. There are now three lots of greylag geese competing for the grass on Rona. Plus one orphan, the wee goose does not seem to be with any of the three lots and is permanently on its own in the sheep field, maybe it thinks it is a sheep.

I had been up to the Lighthouse and the path had become terribly overgrown the previous week, with the stalking and visitors coming we had to get it clear and Calum did an excellent job. With so much going on I nearly forgot about our new arrivals, two lambs, completely out of sync with the other lot but that is just the way it is. But the new lambs are doing very well and racing round the field as I write.

Morten and Sophie our Danish visitors came over for dinner last weekend and to discuss the plan for the week ahead. 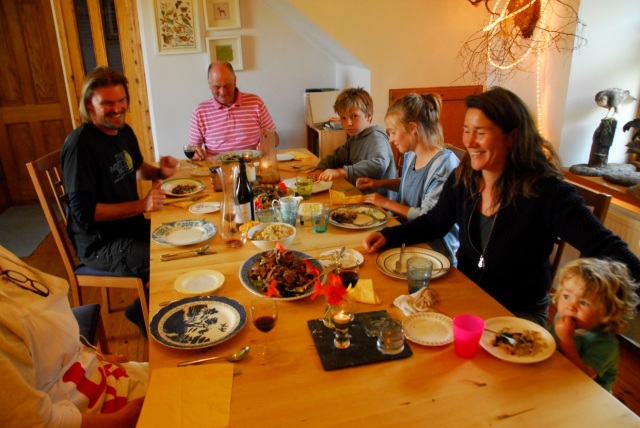 Fishing, walking, swimming, all the holiday stuff but Morten made the mistake of arriving in the middle of the cabling. I have had cables for the internet lying about and a lack of sockets, with the poor day it started out as on Tuesday we decided to route them

He volunteered his services and was pressed into service.

Even his son Pedro gave a hand. 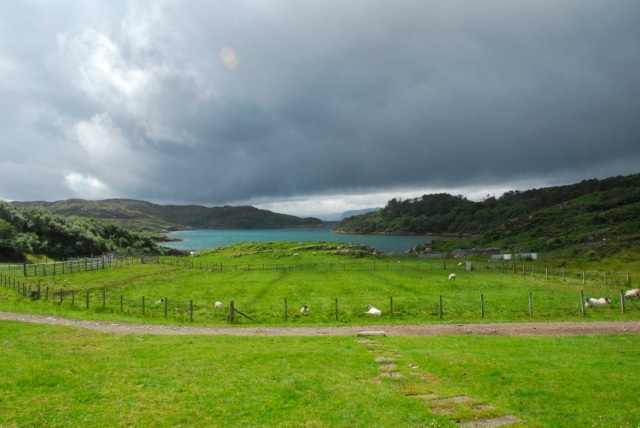 Wednesday dawned  the day was good and Morten decided they would stay until Friday, Calum had gone home Tuesday evening but it turned out a pretty breezy day. A day of tidying up was planned and around lunchtime our pals from Northern Ireland arrived on Yacht Drommedaris. There was nothing for it but to drop everything and prepare dinner, an annual must do if Jim, Eddie and Michael arrive. 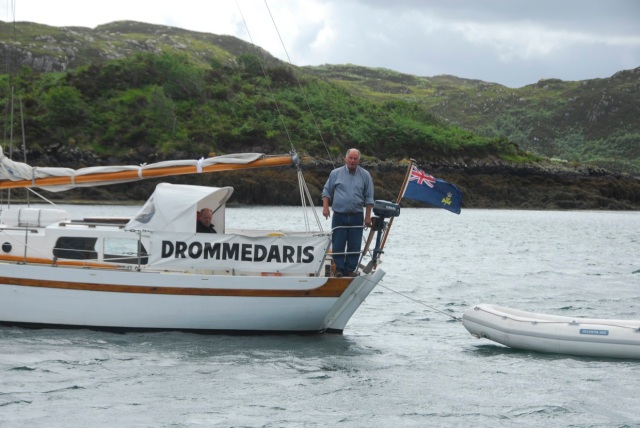 One of our favourite boats and crew, the Falmouth Pilot is very well kept and another ‘Stangford Lough’ yacht.

Needless to say a ‘very’ good night was had by all, Chris and Neal had come over on a very wet Wednesday night to enjoy a supper club with the crew. Thursday was even more tidy up, then out on the boat with Morten, Oliver, Chris and Neal, a beautiful day with a few coley and no mackerel. It was good to get a night off and get ready for Friday which promised to be a busy day. It felt like a Saturday changeover with Sophie and Morten leaving, in the middle of it all Seaflower arrived and 3 kayakers. The day passed in a flash just like my specs which (for the umpteenth time) fell into the sea, a common complaint here.

After everyone left the gate was closed and the dinner out of the way we decided to go out fishing, there were no fish taking but plenty to see. The light was stunning and the stags were feeding by the shore, Eric looked well in his summer coat.

Saturday came, Chris and Neal left, no visitors arrived, it is quiet for some reason in the cottages. But the peace was not long in being interrupted, The Classic Malts tour (or at least some of them) arrived from Talisker I guess. Andrew Bishop and pals arrived up at the house and had a brief ‘Edradour’ whisky tasting in the utility room. I must be organised next time they call. They were very impressed with an Island that offered a shower and free whisky tasting. Andrew sent up some whisky tasting glasses which we will of course use, lots.

Saturday night was driech but 11 boats filled the anchorage. 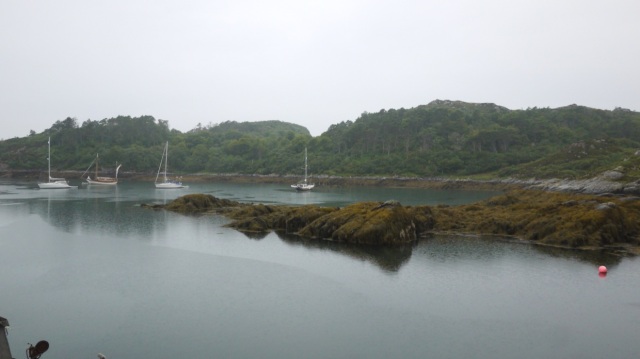 Sunday i looked out the window and the twins looked as though they were scratching themselves so panic, it may have been maggots but no, after a bit of a rodeo, we caught them and it was only a few ticks. Meanwhile they are running about just as usual.

Now it is Monday morning, Seaflower is on its way, Only one yacht left in the harbour and another week lies ahead. Lets hope that it will be a little bit less manic.

1 Response to I will Look In Your House