Thursday we got back and straight into the work again. Calum had done well at the pointing despite the weather and had two thirds of the front wall done. Everything is in place for a quick finish if the weather is kind, the house is empty and Calum’s available. We went over to inspect and the three missing Canna sheep were in the garden. We had asked our visitors Fee’ and Richard to trap them but they had escaped from their garden, lucky for us they had gone into Escapes garden just as we arrived. We quickly shut the gate and hey presto. Two hours later they were back in the field.

I had to be careful with them because they are ready to lamb and we lost a lamb last year due to similar circumstances. So it was a slow trip back over the hill in the trailer. Next day it was full on but I had time to fit the new wheels to the abandoned ornament in the garden. 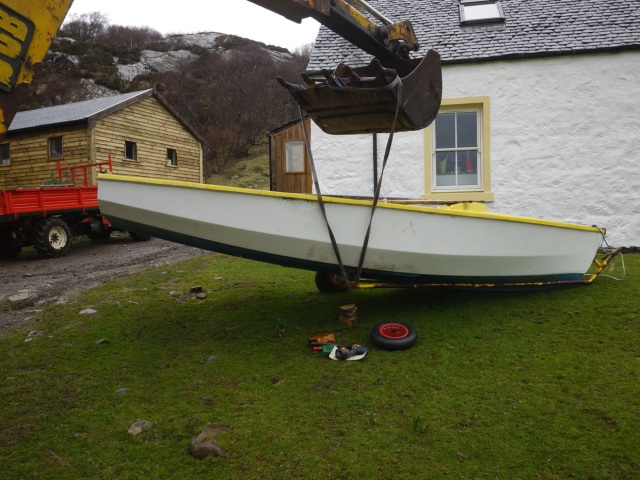 After the gale in October when the mast got bent I did not know what to do with the Wayfarer, so decided it will make a tender for getting out to the mooring. Not the best but better than nothing. I had put MV Rona into the water but was not keen to leave it on the pontoon when I was away because of the gale forecast. The fenders had been washed away. But I had an idea and a quick discussion with Kevin and Calum resulted in the new bollard/fender. One down two to go.

I was working on the pier and thinking that our fish boxes we make would make ideal shelters for the ‘many’ notices we have to have here, so the afternoon was spent putting them up. Hopefully the home made notices will last a bit longer this year. 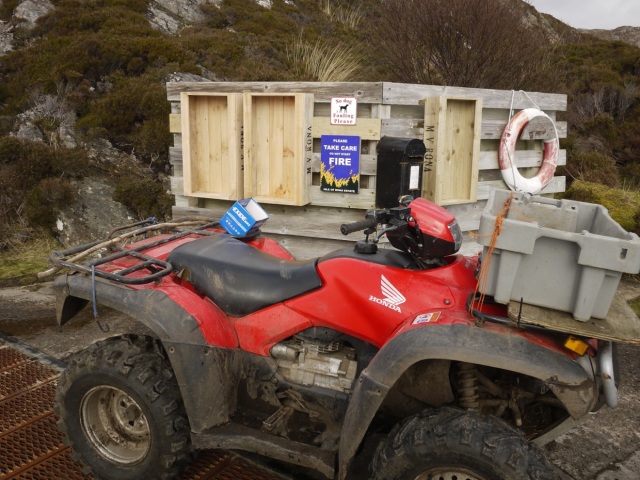 One day good, one day bad and the 13th although not a Friday was a poor day, I got a bit bored so decided on a bit of sculpture with Lorraine’s knitting!! 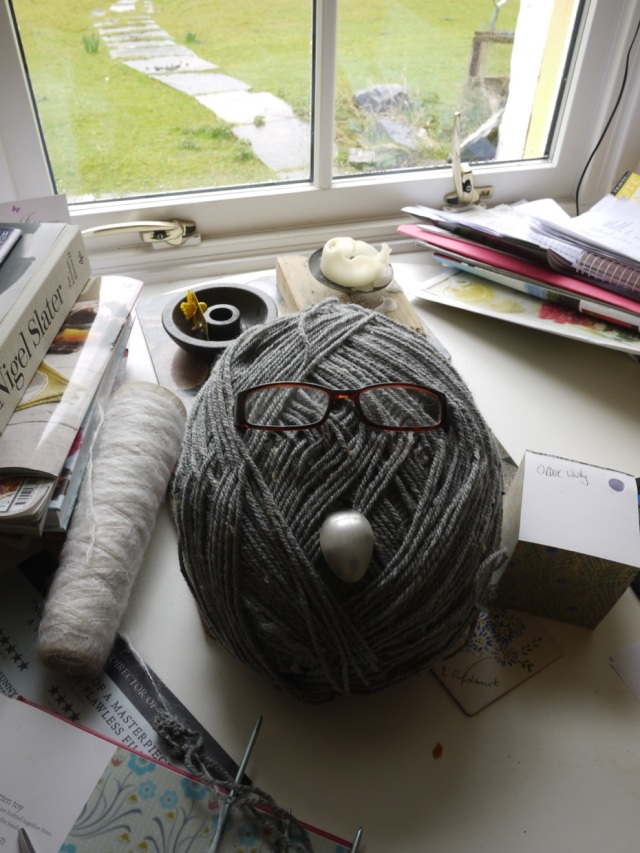 The Canna sheep were not liking it much either, I’m sure they would have been happier out in the hill getting a shelter instead of standing in a very wet field getting battered by the rain. Always quite a worry at this time.

Next day it was off South to look at the amount of pipes we need for the digger which is coming next week. I took the opportunity to have a look around for stags and of course antlers. Luckily I found yet another of Eric’s huge antlers and another half of a twelve pointer. The weather that day was fantastic and 6 stags popped up in front of me, nice to see, some still with full sets of antlers. 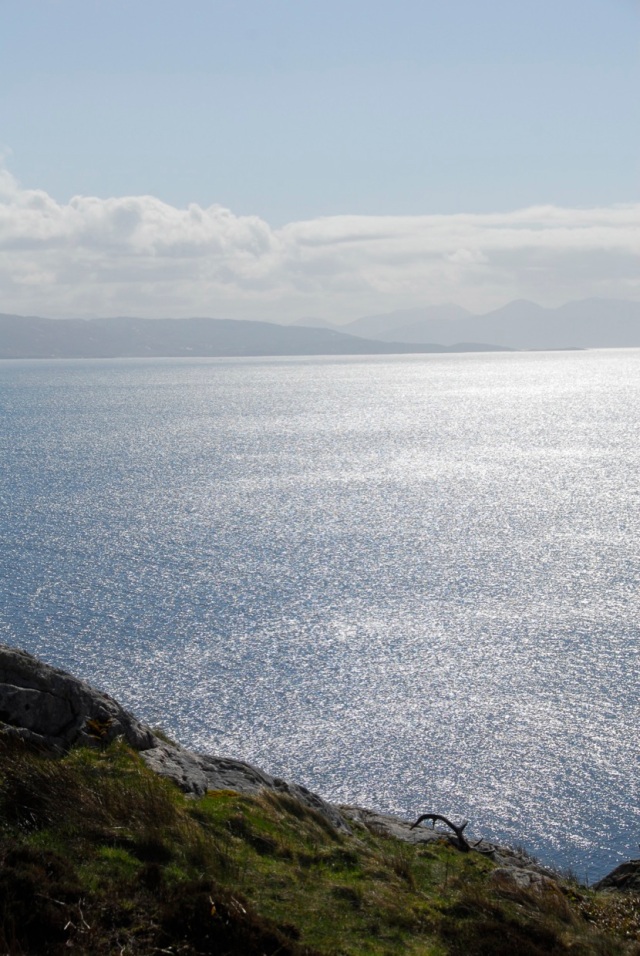 Looking to The Skye bridge From South of Rona

Looking North was much the same, no yachts just the range boats and a trawler heading North. 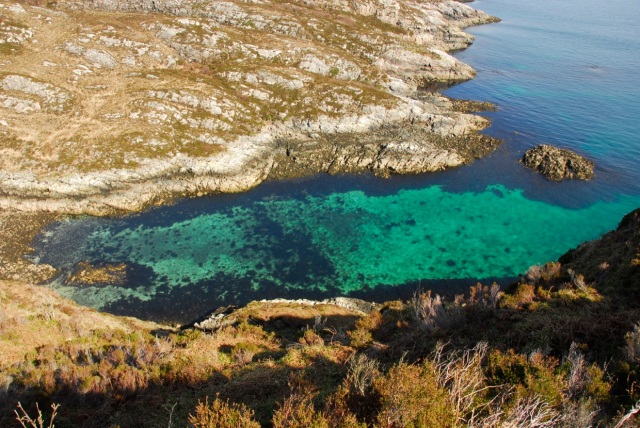 Looking North along the East of Rona

I was admiring the view and looked down at my feet and here was a beautiful pool of water with a huge drip falling in it every few seconds, quite a picture I thought. Such a lovely day just to enjoy the Spring weather.

Back to the Lodge in time to see the new lamb born that morning staggering about, the first Canna ewe to lamb had just had her lamb first thing so I left it since it was such a good day, peace and sunshine is worth much more than all the ‘stuff’ the lambing shepherd has!! 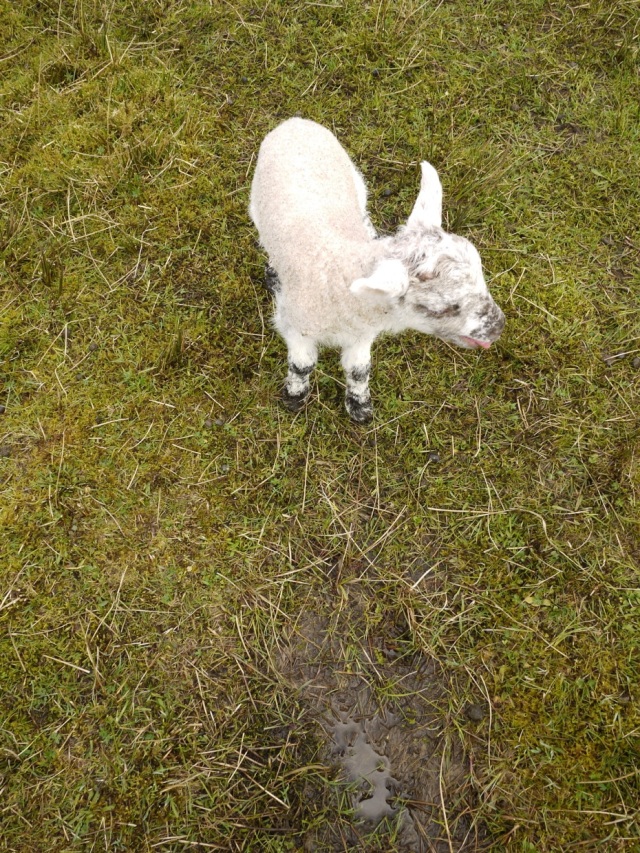 The lamb threw me and I got ready for the rest of the lambing, I also got the boat in the water, the creels aboard and I was just thinking about getting fuel for the Lodge central heating when L said, no hot water. Of course I knew right away that the kerosene had run out, it had been low. I went to the shed to switch on the electric water heaters but they refused to work so nothing for it but a late evening spent topping up the heating oil, bleeding it and getting some hot water for a welcome shower. No matter how hard I try I ‘always’ end up getting a liberal dose of kerosene on my clothes and that night was no exception. First thing in the morning it was over to Escape to beg some fuel. A common occurrence at this time of year when we wait for the Spring delivery by landing craft.

Once that was done and everything running smoothly it was back to the boat. The outboard on the port side was not throwing out water as it should from the tell tale, never has. So a few phone calls and nothing for it but a new impellor. The second one I’ve fitted. It looked ok so I re-assembled and still no tell tale. I left it until Tuesday (yesterday) and was advised it may be salt crystals but I was suspicious. Another hour later and here was the culprit. A small piece of silicone, possibly gasket sealer, very Yamaha in colour lurking right in the hole where the tell tale throws the water out. Not good because the engine depends on a through flow of clean cold water. So I’m suspicious this has been in the water way since new and only now blocked the hole. I cannot see where else it could have come from. It just shows you how a small thing can ruin a very expensive piece of equipment!!! 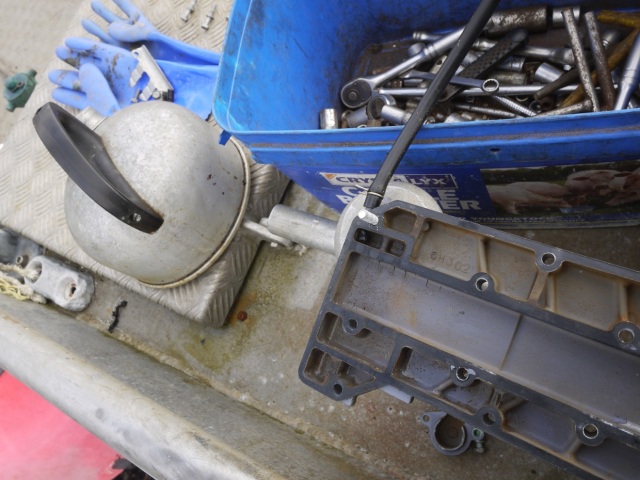 The Cooler Cover and Blocked Pipe