Last Thursday morning we woke up to find 6 deer out the back. They have been about the house all month. The upside of living alone so close to nature is that the animals  get used to you as we, it seems,  are not a threat.

However, after breakfast it was a different story. When I went up to the poly tunnel to feed the hens. One of our many mink had visited during the night, unfortunately the mink had had a killing frenzy and did away with our chooks.

It is unfortunate that the mink have made it to Rona, whether by boat or by swimming from Raasay, who knows, but they have been here a long time, long before I got here. I would imagine there is a very healthy population, I keep hearing about them from up North and see them myself quite often on my travels.

The mess that I found, made me think first that it was an otter. We have traps but to trap properly you need to check them every day, have fresh bait and time. None of which we have, so it is a bit like shutting the door after the horse has bolted setting traps at the scene of the crime. But, mink are pretty predictable after a kill, they come back looking for more. So it was no surprise and no satisfaction to catch a mink next morning. We’ll leave the traps for a week then shift them but I guess it was just a hungry mink having a wander away from their usual hunting ground (along the shore). Unlucky!!

We had shifted the chooks up to the poly tunnel around November because of the constant rain and with the vent holes and general porous nature of the poly tunnel it would have been a major job to make it secure. We thought that with us about the place so much the ‘vermin’ would not appear, The hens  had been laying all the time so they will be sorely missed. After we sorted out the traps I called Donald and put in an order for four more, so fingers crossed and looking forward we’ll have to construct something pretty secure to keep the wee blighters out.

After another morning sorting that lot out it was difficult to get going but going we did and first on the list was the replacement stove in the bunkhouse. I had leveled off the hearth and was finishing it off with a bit of tiling , as it was a good dry day I got on the roof and swapped chimneys. The new stove has a bigger flue.

The old Lodge dining room  stove will do nicely down in the bunkhouse, much bigger and warmer I think. The next job will be fitting the old chimney from the bunkhouse up at the cabin for the other stove out of the Lodge lounge.

Apart from the chooks untimely passing it has been a good week work wise. I mostly got all the jobs I wanted to do, done. After I finished the shelves up top I put a new set in the genny shed for the paint store, the warmth in the genny shed will help in case of frost. 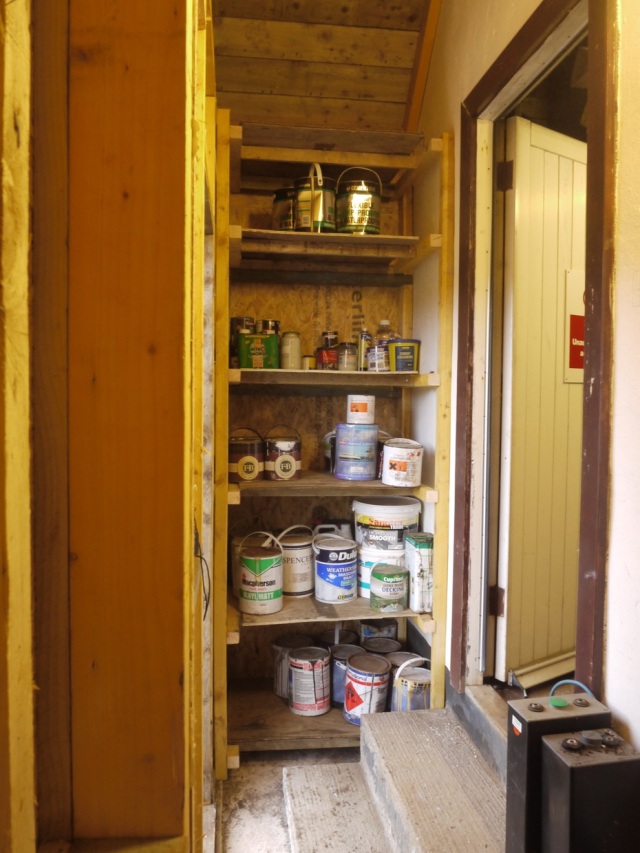 When you waken up in the morning on Rona you generally make a plan, the day rarely goes according to it. I had that in mind when I opened the genny shed door yesterday morning (Saturday) and found one of the diesel return pipes had fractured, here we go again I thought  another morning messed up. It is only weeks since I replaced it so not good quality pipe and worrying for the rest of it.

I replaced it and fingers crossed, got on with the rest of the morning chores. We are away on Monday so I’m trying to get all my jobs finished before Calum and Irene arrive for the weeks cover. As usual it is a bit of a rush trying to put it all together before departing. I’ll finish the floor at the holiday cottages and that should be that.