Been a very mixed few days, work wise. The weather has improved with the last two days very dry (ing). It rained all of Monday night but from 8.00am Tuesday it has been dry, Hurrah!! Just the job for what we had planned. 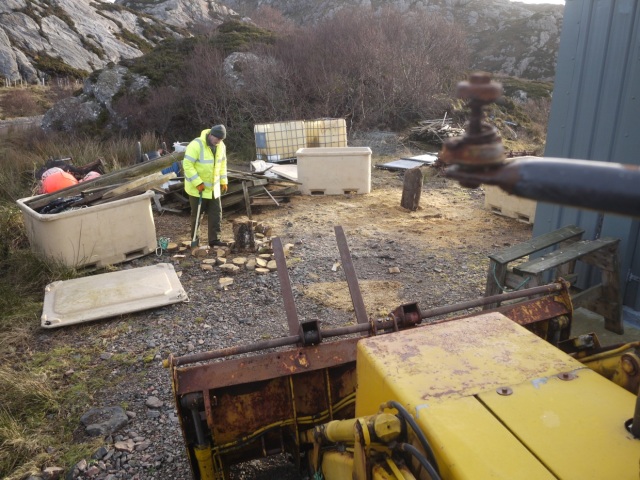 Stocking up on Firewood

We finished up the firewood at Dry Harbour and then made a start on the Big Harbour stock, with three old fish boxes to fill we had a full day. Saturday night I was glad to put away the chainsaw, it’s a bit hard on the old back. Sunday George took off on the digger to create mayhem, I butchered the hind.

The ditches around the top shed had become very overgrown, the culvert was full of silt so I ‘mucked’ in and got very dirty.

We got it going in the morning after I had jammed an old piece of curtain in the middle of it, trying to push the silt through last night. The hens liked the bugs we were digging up though.

Then it was back to the forest to put in the strainers for the new sheep (Yachtie) fence!! The day (Monday)was wild and showery but in the forest it was sheltered and good to work in. We got all the strainers concreted in, the ground being so hard it is difficult to get depth. In the afternoon George carried on with the road work and I got ready for sheep work on Tuesday. 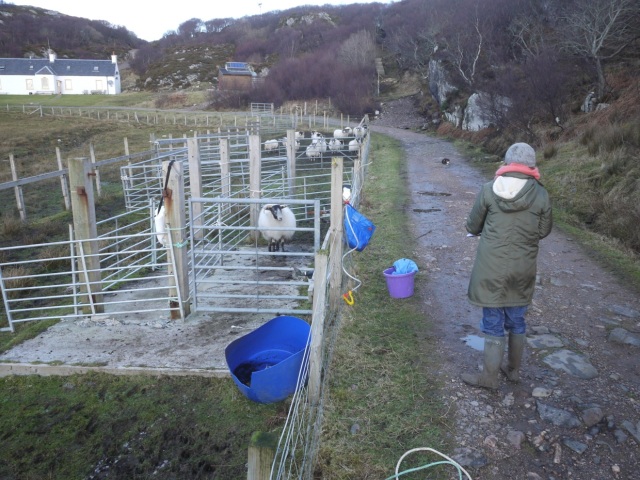 Tuesday morning we had a bit of a rodeo getting the sheep in. A dog just might be a good idea after running around like collies for an hour, but we manage to get  all but 4 sheep in, so George headed off to the roadworks and we got on with the dosing and checking over the sheep. Most of the sheep were in good order which is a surprise given the poor wet winter we have had. Maybe it was the sunshine from around 11am that perked them up.

To-day it was a little bit grey first thing but soon became calm and sunny. It makes a change for sure to hear and see on the TV the low pressure systems hammering the South and not us. As it was it gave us another day to finish the sheep in good weather, so we set a trap and caught the 4 escapees.

The four had come into the first field, which gave us the chance to shut them in but they were too lively so a smaller pen was in order. 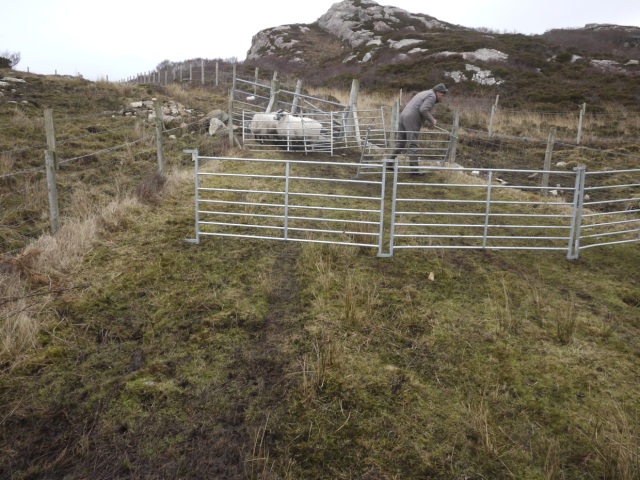 Once in the pen we quickly gave them Supverm and Dysect for breakfast, they too were in good condition.

We finished up and George went off to play on the digger but at lunch he came back to say the tractor had a puncture. After lunch I quickly repaired it, luckily I had a new tube, then I came down to the house and here was George with the digger stopped. There was a fuel problem.

I got him going but was not confident and as George made his way over to Dry Harbour the JCB konked. 150yards past where the tractor had come to a halt.

George headed over to the cottages with a spade and I rolled my sleeves up. The JCB filters are really awkward but after much blue sky I got them cleaned and changed. 1 hour later I made it up the hill and left it for George to drive over to the cottages.

Running out of Time

After all the trials of the day it was a super ending with clear views all around, it turned very cold and I would think it will be frosty out there tonight.

Been a very mixed day for a jack of all trades…….