Been an incredibly bad weekend of weather, February came early this year. If it was not for the ‘warm’ rain,  it could be Feb’. It has been wet and windy since Friday, gale force winds and grey. Good reminder of what is ahead made worse by the radio telling us about ‘Indian summers’ elsewhere in the UK.  Hey ho, it has been quiet though and we have been getting up to date (inside), having a bit of downtime and just enjoying the peace. So there is a silver lining in the grey.

Drookit! But Happy to see the Worms

The hens, sheep and I would imagine, the deer have been getting pretty wet. The insects and worms are plentiful, I saw a Rona wren the other day trailing a worm which must have been 4 inches long. 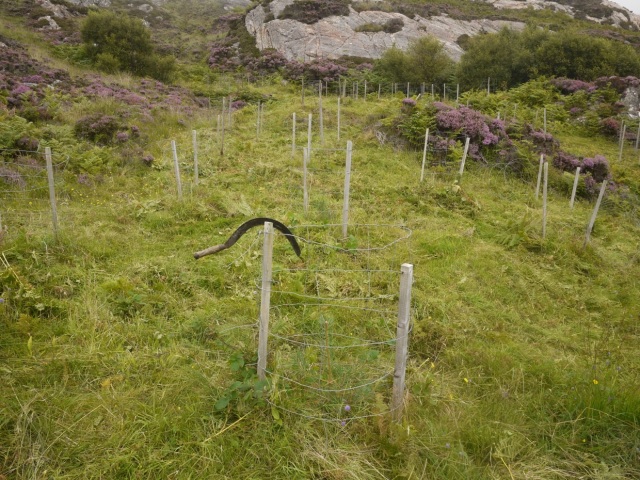 Friday I carried on with the weeding after strimming the pines at the top of our track, they were from Christies Fochabers a few years ago and they are doing well despite the weather, deer, weeds and coming from the East coast. I’m going to cut some cardboard and put it around the bases to see if that will stop the weeds abit, I’ll weigh it down with sand and that may give the tree mounds a bit of a feed, we’ll see.

What else do you do on a wet day.

In between the gale on Friday and the rain there was a lot to catch up on in the house, the cupboards are a bit bare so what better thing to do but bake a cake and some shortbread. I couldn’t find Julia’s recipe she gave me but the Be-Ro book never fails.

Lorraine was at Dry Harbour working in Escape getting it ready for a photo session as we are putting it on Alasdair Sawday’s web site, we feel like a change. She reported the Ewes heading over to Dry Harbour which was no surprise as the wind and rain had seen them sheltering behind the Lodge generally turning into a ploughed field. I went over later in the day and there they were mowing the Old School’s playing field. 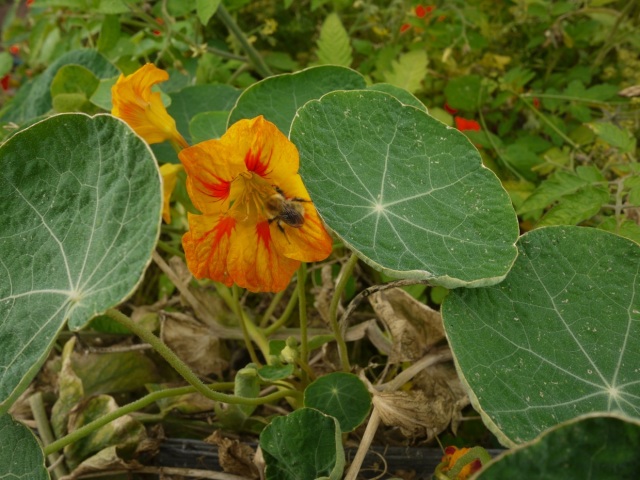 You could help weed the poly tunnel.

With the wind blowing L was looking for some support in the poly tunnel but I offered to make pizza for tea so I was let off the hook, but on a day like it was the poly tunnel was quite a good place to be. It has got a wee bit out of control lately but it looks good because the flowers are adding a bit of welcome colour, plus the bees like them.

Just to cheer us up.

The pizza was easy to put together, chanterelle mushrooms from the forest and figs from the poly tunnel, plus a little Italian ham left by Muriel and David during the week, excellent.

With a break in the weather forecast for the morning only, and a couple of jobs hanging about down at the South end. We loaded up the bike and headed down quite early. When I was strimming I kept finding stumps which are good at tripping you up in the long grass, so I was keen to cut them at ground level. L had offered to pot the runners of the wild strawberries. There was always the chance of a stag so I took the rifle too. On the way South, two older stags crossed the track and disappeared to the south west corner. On getting to settlement I spied a stag lying down on the very end of Rona, L then spotted another coming in beside him. A quick glass and I decided he was a good cull stag. L held back and the rest is history. A very successful stalk and the stag did not know I was there. His mate scarpered pretty quick and the three Sea Eagles flying around Kyle Rona would have been quick to clean up the gralloch.

Then the hard work started. The stalking can be hard at times, perhaps a long day with bad weather, changing wind or just very smart deer. But once the stalk is over then dealing with a carcase that can weigh between 150/300lbs can be tricky. Of course I don’t help myself and I had to drag the deer for a while before I could find a suitable bank to load it from. Without trying I found a new ditch on Rona and had to start all over again. 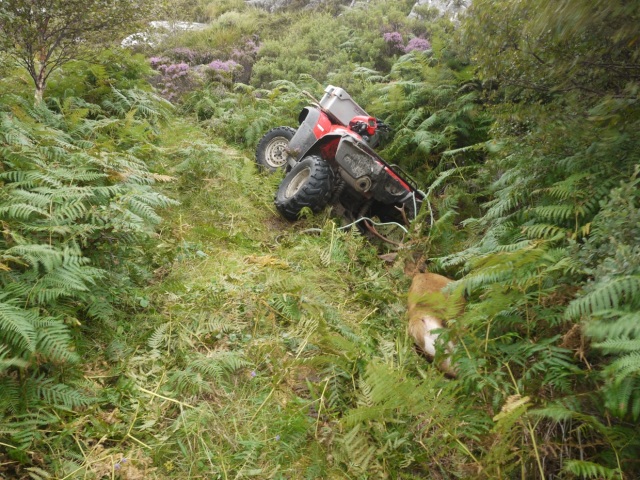 I left L down there and headed home to the larder. The rest of the journey was uneventful and I was pleased to see the quality of this stag, and the deer in general that we have on the Island , the ground certainly does them well. I was reflecting whilst in the larder that it was about ten years since we brought in new deer to help the very small resident population. The regeneration programme we had been involved with for many years was going well but there was a danger of areas of woodland becoming jungle dominating the Island, so to help check the growth and gain access to the areas of dense forest we increased the deer population with a hope that they would stay and grow into a sustainable herd that would benefit the Island in lots of ways. Unfortunately for the deer there has to be management and that falls to me.

The end result is good quality venison and of course the presence of the deer whom always are interesting to watch. This year we have reached the stage of a good increase in the population so from now on until the season ends there will have to be a lot of stalking days.

Deer unlike sheep and cows can be culled and butchered locally. They do not suffer the same restrictions as the farm animals with the chance of: transmissible sponiform encephalopathies (TSE’s). Which is a pity because it would reduce the transport costs for this Island and all the other Islands if we were allowed to slaughter and butcher our own farm stock. But that’s the law and we are lucky that we can add to the income of Rona with what deer we have.

Julia tells me that home kills were a regular part of the diet of all of the West Coast for years and no one ever had a problem, the only problem as far as Julia was concerned was when a ‘Braxi’ sheep was found dead around the croft and it was turned into dinner, she says, thank goodness for Sharwoods Curry Powder, even in the early part of the last century.

This one will soon be turned into very fine steak.

By coincidence we had taken out of the freezer a venison shank. I have been experimenting with this cut for a while. You see lots of lamb shanks but seldom venison. However once I had had a look on the internet I came across a recipe for Portuguese style venison shank. I have to say it is pretty good and this small leg did us in various guises for three days, yum.

Retired to the Cabin

Even better taking it up to the cabin in the evening for finishing in the wee cooker the we had some of  it for dinner. It was such a stormy night we decided to stay put and found it to be very sheltered even when the wind really kicked off around 11pm. The only negative was a birch branch which tapped the roof every so often during the night. Next day I cut it off and spent the morning doing computer stuff until lunch time when hunger got the better of me. Again it was a foul day, catamaran ‘Catflap’ was still in the bay, anchored behind the Island, he has been there since Thursday and we’ve seen the skipper twice!!!!

Tuesday I was under orders to get over to Escape to take new photos for the Alasdair Sawday’s website, weather again crap so off we went in the jeep. To find that the sheep were blocking the road, they had been back over to Big Harbour on Monday morning but of course the grass is greener on the other side.

Time to hang up the computer and as I write this (Tuesday 9pm) the wind is still rattling in the chimney.