The weather got better and all of a sudden the yachts were here in droves. From Sunday it has increased every day with 9 yachts in on Tuesday night, last night after a day of rain they had departed only leaving the Yacht ‘Rubadubdub’ from Stein, Peter Padget the skipper in his 80’s with poor sight, he’s tough. And another on the mooring. The numbers are still down but catching up slowly. The visitors were a refreshing change and were very appreciative of the facilities. It was good to get some positive feedback and lots of stories and input. At one point there was a gang in the utility room and more appearing every minute. One couple arrived in the middle of it all and told us a very disturbing story but more of that later.

Unfortunately the sun disappeared and we had much needed ‘heavy’ rain on Wednesday morning, but it did brighten up later. 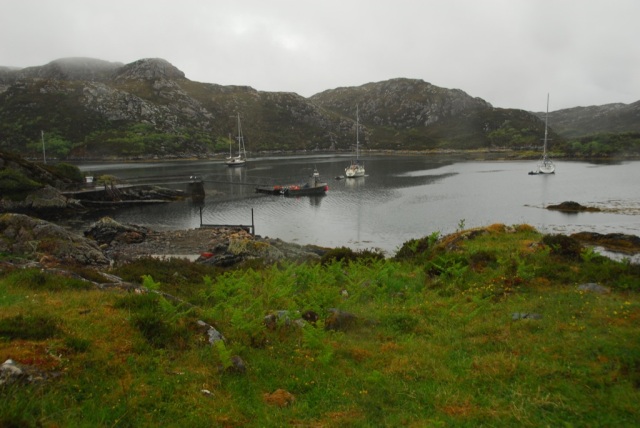 On Tuesday it was forecast rain but it looked reasonable so we took time out to visit the North West corner. I took the guests on the stalking route for a change and for them it was a new way to see Rona and following deer paths made it easier walking. I’ve lived here for 11 years+ and I think I’ve seen most of it but for the first time I noticed this tree growing out of the rock, a very tenuous hold for sure.

Then on the route we cam upon a stone shaped like a huge sofa, a good place to rest!

We reached the ‘secret loch’ and had a picnic just as the first shower started. It came to nothing and we made our way back.

We had not seen many deer as we walked out with the wind behind us but as we walked home we saw quite a few hinds and at last a calf feeding from its Mother. Back to the Lodge and the Yachties had amassed. One of them, Ted Spash from Yacht Delphinas told a story about how he had fallen 40 years ago at Dry Harbour and suffered a broken leg (a spiral fracture). His wife had run to Big Harbour and found another yachtsman who had come to their aid. With two young children and a boat to deal with,his wife had taken charge and got them back to Portree where he had been then transported to Broadford fixed up and told to rest. Next day he sailed the yacht with his wife doing most of it I guess, back South. He had been looking for the spot because he was keen to find the boot that the fellow yachtsman had cut off, a Dunlop. When he mentioned the boot a light cam on in my head. Only two weeks ago, maybe three I had come across the boot in the middle of the forest at Dry Harbour and was intrigued how one boot got there. I came home and mentioned it to L, now we know. He would like to have it back but after 40 years in the undergrowth I don’t think it is in good shape. 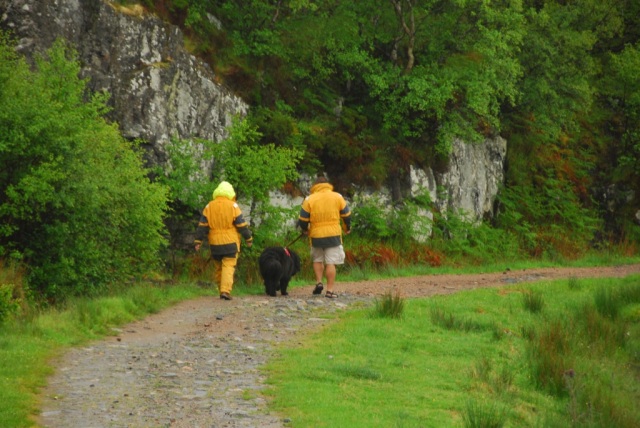 For the next couple of hours a steady stream of yacht visitors were at Rona Lodge. The Bear is a regular visitor!!

With the rain stopping and the wind dropping the midgies came out in force so the best place was out on the boat, we fished a while but no pollock, they are late I’m told. But we did get some nice big langoustines.

Next day, yesterday it really rained which was good for the ground as it was tinder dry. The water supply was under pressure too so it could not have arrived at a better time. I had just moved the water tank to Dry Harbour but had not got it in to place yet. With it being dry I thought I’d better get a move on.

Maybe next week with Calum we’ll get it connected. We had a planning meeting at Skyescape and were discussing extensions and renovations when Rona came to the door, she was on the look out for some baking material, she is a baker so you would have expected her to have brought some but it would probably been in industrial quantities, but we were happy to supply and maybe to-day I’ll get a cake.

Rona’s husband Andre and the girls were with her, togged up for rain and midgies but the girls gave up as the rain got heavier and they headed home.

Arne was keen to fish and in the afternoon we headed over to Holm to try our luck where David and Muriel Banks had caught a lot, but we’re not as good as they are for sure and came back empty handed. The only high light was seeing our first Minke Whale a 6 to 7 metres monster who was feeding fast. There must be fish about.