The View To-day as I Blog

I must be mad after this mornings rain and wind, blogging in the sun!!! But it was a paperwork day after the last month of visitors, workers and friends. It was like February again this morning, although spring now it can change to cold, wet and windy in an instant. Nice to see the Redpoll’s? at the door.

What a pretty wee bird. Again it has been a while since the last blog so lots of catching up and Paul was here yesterday with Ross looking for a birthday present (not for him).

The Crofter and Assistant

It was good to see the neighbours but no new news as Hugh had been here for 10 days so we were pretty much up to date on Raasay stuff. I was going to put a link in but the computer says no, just read Paul’s blog. Some funny pictures but good to see he hasn’t lost his enthusiasm for life at the end of the road. If you put that into Google you will see his blog, I think it worked this time!! And the picture up top verifies Paul’s thoughts on to-day’s weather.

On to the past week/or is it another ten days!!

I just got confused as I posted on the 19th but the story was only to the 15th, but here we go.

Hugh was getting closer to the pier, but doing a great job on the way there, great to have a flat surface at last. the ATV certainly knocks up the road.

The road is so bumpy that nuts and bolts really need to be tight otherwise everything falls apart but my Glasgow trained mechanic was on the case and the Goldoni breakdown turned out to be terminals falling off, Hugh sussed it. The weather had been up and down but the 9 kayakers that arrived in the gale were happy to see a better day and left just before the landing craft arrived. It was still breezy for them but once in the shelter of Raasay they would be ok. In fact I think the next day was a stunner so hopefully happy paddlers, a good bunch from North Wales.

The Landing craft ‘Spanish john’ arrived on time after being held to Ransom by the pier master in Kyle loading our new jeep, bah, humbug!!

Our New jeep was £300 which is much cheaper than an ATV at £6000!! A bit of ventilation in the floor but otherwise sound, wonder how long it will last? Greig is very experienced with his ship and landed where no one has landed before, very versatile. And good for future reference. Must build another slip!!

I would have loved to have kept the digger but Hugh would not accept £300. In the middle of it all M V Seaflower arrived with a crowd of travelers. 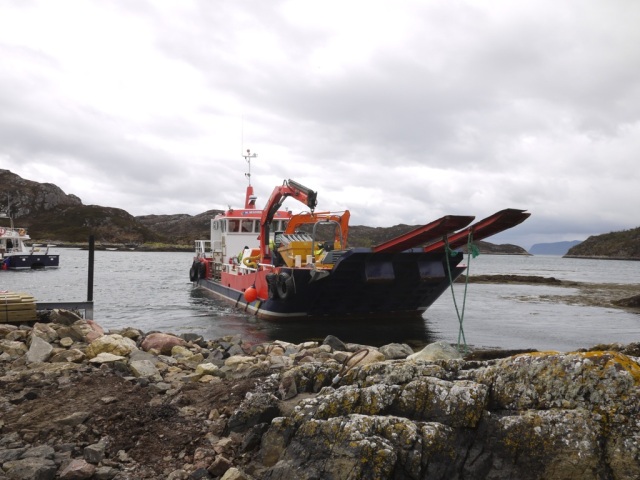 Nothing for it on Thursday night but to tidy up and get ready the bunkhouse for the next Kayakers who had called, coming a day earlier, the joint services from Ballachuilish. They were here for the night and were glad of a dry room and fire to get their stuff dry from the very wet day before. We took the jeep over to Dry Harbour and were disappointed to be shaken not stirred, the road felt incredibly bumpy. Less air in the tyres me-thinks. 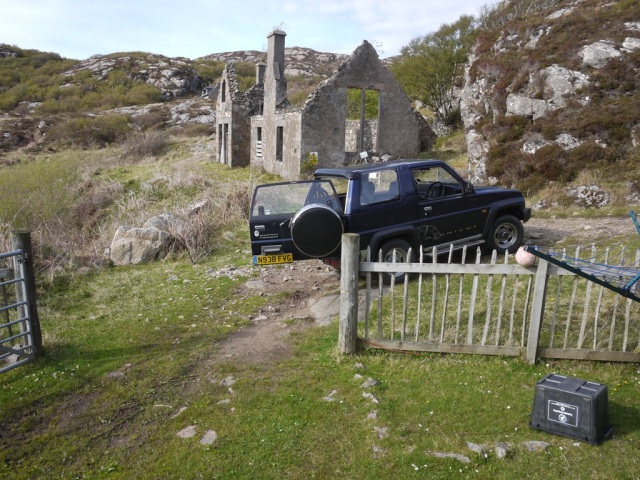 Quite good it is though and we look forward to a flatter track which will make for a better journey, the motorbike tyres fairly dig it up. Next day Steve and Jo went away, Friday again as saturday was forecast for very windy. Our cottage guests and friends arrived with Nicky and Iain who were going to help in the lodge.

We got our guests into Escape and had a few beers a listen to some music and a late night. Saturday dawned, Iain took to his bed, the flu/cold had won. The day was not so good and a tidy up was in order plus a little fencing. Sunday we sorted the sheep I had dismantled the cattle gates and sent them away for sale with Hugh and now we will increase our sheep hurdles, much easier for us too. 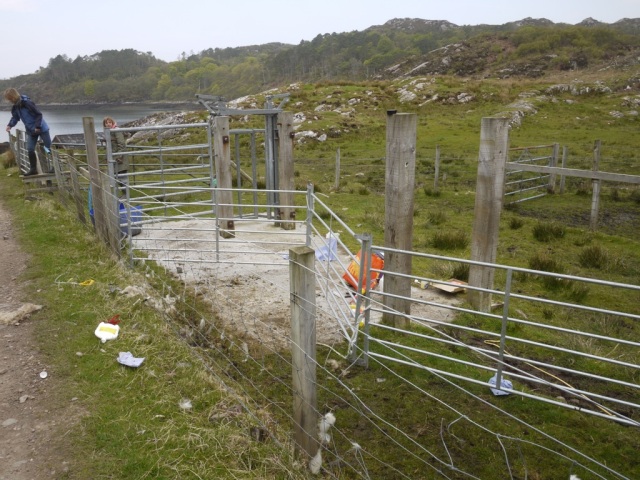 Monday arrived and Iain rose from the bed, took up his hammer and set too. I got ready for Portree in the morning to meet the surveyor who I knew was going to give me a hard time (quite right). 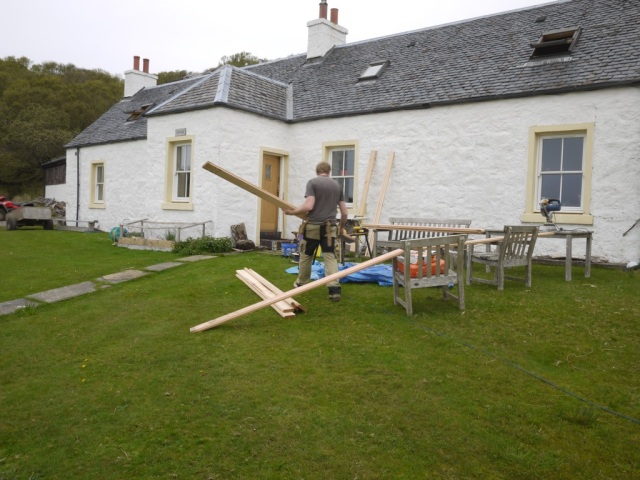 Iain had brought over some nice Redwood he had from a Chalet build at home and was going to put up a small porch to save the door which is ruined each winter with the driving rain. On Tuesday morning it was up at 6.00am off to Portree to be there by 7.30am. i had to be on the beach for a ‘bottom’ inspection. Jonathan Wood our marine surveyor was there to meet me and was very, very thorough. But with boats it is better to be right rather than cut corners and we appreciated his thoroughness. I returned to Rona in the late afternoon having been run around by Calum who I press ganged into helping (he was on a day off). There was a yacht in and it was a beautiful night. Later on Yacht Latitude and Yacht Corryvreckan arrived, the latter spent some time anchoring on top of a reef.

Yacht Latitude came ashore and we recognised them from last year, they paid their dues and booked showers. Good Rona supporters Yacht Corryvreckan came ashore, didn’t pay their dues and didn’t read any of our wonderful information notices. On checking it on Google it turns out you can have a berth on this yacht for a week in May for £1200, maybe they were short of coins!!!!! More later.

In the morning, a fine day, Corryvreckan left earlyish. Yacht Latitude left a little later and headed North up the Sound but was back in and then stormbound for a couple of days. The sea had risen quickly and a very bumpy hour later the had elected to turn around, a pity they did not leave and go East as the East side of Rona was pretty sheltered. Better safe than sorry. As it was such a good day we headed up to the deer fence around the reservoir to make a gate. Nice to work out in the cool breeze with glorious sunshine.

Next day Iain said, what next. For 5 years I’ve wanted to create a wee, museum, exhibition in one of the ruins so what better to do than do it So……

We had been over to Escape on Monday for dinner so we returned the compliment and had Jennie and Laurie over for Tea. A de brief in the chalet but we had forgotten to put on the heating so cider and beer were not the best on a cold ‘February type’ night.

Letting out the Warmth

Getting on for the end of the week we pushed on and got a few more jobs out of the way.

Seascape had a steamy window and Iain had brought the glass, then it was onto making a door, window frames for the Museum.

It had been pretty wet most of the day but it did dry up at night and it was a lovely evening. Iain and Nicky took off on the bike for the fresh water loch to try and catch a trout for tea but not hopeful we went out to check a creel for a crab. Better than that we picked up the first lobster for us of the season.

Needless to say no trout arrived so we dished up a Provence night with mushrooms, ham and goats chees with grilled lobster and Irene’s  famous chips. Much wine and whisky later (including a look at music videos on you tube) we got to bed pretty tired after a full week. Next day, the ferry was bang on time and our guests were off with two new ones arriving for Escape.

Laurie was quick to help with the casting off of MV Spindrift having sold his yacht a few years ago he did admit to missing it very much so an added enjoyment to a visit to Rona is of course the ferry. 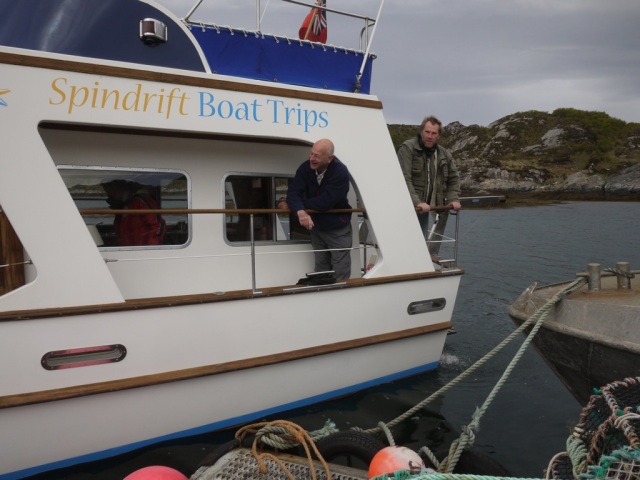 Once the dust had settled we tidied up had a glass of wine and slumped in front of the box. Can’t remember what we watched. Next day Sunday it was over to the ‘Museum’ to fix the frames by using expanding foam. Great stuff when it works but when it doesn’t it is a nightmare. After cleaning the gun something must have stuck and when I connected the canister the foam started squirting out, of course going everywhere but in the frames. I did get it under control but after wasting some. However after a quick clean the next tin worked well. Now the frames are solid, and the wee house will soon be sealed.

There are lots of artifacts that we found in the floor when we dug it out and somewhere I remember it being a cobbler who lived here and certainly there are old bits of boots and lasts. Sunday night and a lone kayaker was spotted heading out of the bay around 5pm, heading North, he couldn’t have seen the next days forecast, gales, rain and cold!! A hardy breed. Then Yacht Longbow arrived, tied up to the mooring and arrived at the house. I was handed the fee and asked if the mooring would stand their boat but was surprised to learn it is 20 tonnes in weight!! I assured them if it survived a catamaran on it at 60knots of wind then they would be fine but that made me think about insurance and am now on the case, you never know. 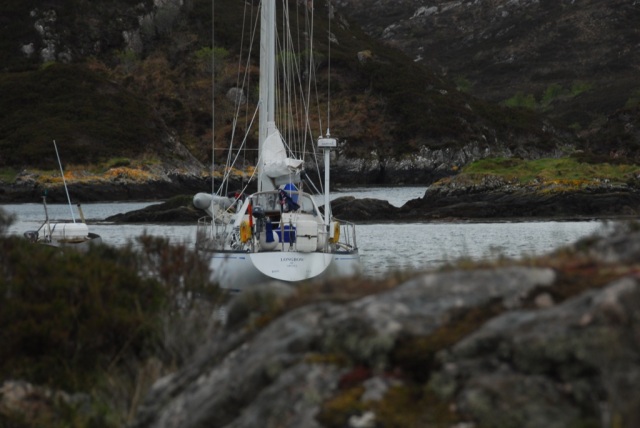 That is me up to date, there is or was much more but one hours blogging is quite enough, i’m off to enjoy the late afternoon sunshine.