You Could Not Make This Up!!

That is what John said this morning just before he boarded the Spindrift for his long trip back to the Black Country (Dudley).

6.00 am this morning Nicola one of our regular guests called  to see if we were sailing. I called Nicky back at 7.30am when it was light enough to see. Not hopeful.

8.00am We cancelled the ferry, it was pretty rough, wet and very windy, after a long deliberation with Kevin.

8.30am I called everyone and gave them the bad news, no sailing. The kayak visitors were leaving Aviemore.

9.00am Kevin phoned, change of plan, sailing now. It had calmed down. It was the turn of the tide.

9.10am called everyone and ten minutes later they were underway. 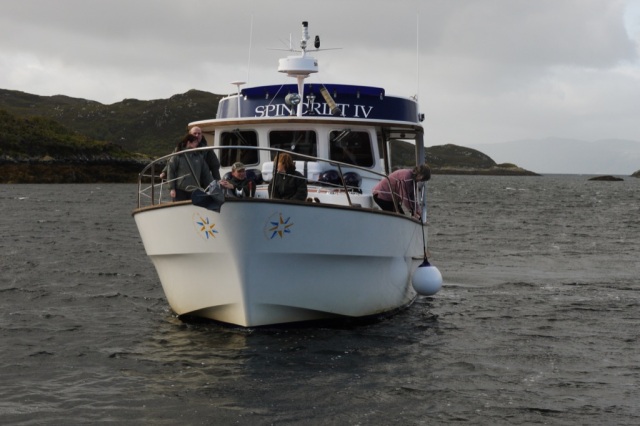 The Spindrift Arrives 10.30am

10.30am Spindrift arrives, the guests were very happy to be here and enjoyed the sail, not too rough but that was because the wind was with the boat. But on the way back it looked pretty bumpy from where we were watching?

Once I got the guests sorted out it was up to the summer house for a couple of hours of light relief fitting the rest of the ceiling and fitting the glass wool insulation. Always a pleasure to do. 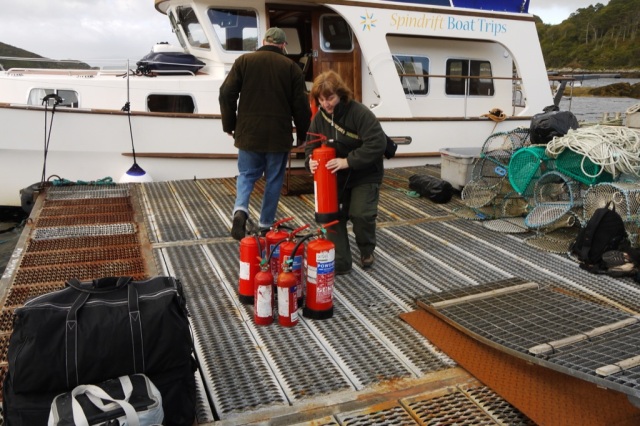 Unloading the guests and essentials.

In between there was a regular update with the kayakers who were heading up to Raasay to paddle to Rona.

3.00pm Kayakers at Sconscer waiting for the ferry. The wind was on the East shore so I suggested the West shore. By the time they would have crossed to Raasay the wind had shifted again and they would have had to make their choice, mine would have been to book into a B&B.

6.30pm getting concerned, a mass of white at the mouth of the harbour, no answer from the kayakers. Thought I’d phone Paul my mate ‘At The End Of The Road’ and he kindly went along to the slip to see if the kayakers were there. He found their vehicle at Brochel and we surmised they would have been delayed but should be here ‘by now’.

A Driech Night for Searching

6.45pm went over to dry Harbour spoke to Paul our visitor in our Escape House, he just happens to be an ex  SAR pilot. No question, phone Stornoway coastguard. I got Nicola and Mark to go to the East shore harbour to have a look and headed back to BH to my phone.

7.00pm Getting dark, very concerned, just speaking to Stornoway Coastguard when the phone rang our kayakers had landed at An Tempuil, right at the South end of Rona, can you collect our bags. It had been quite a trip I think. 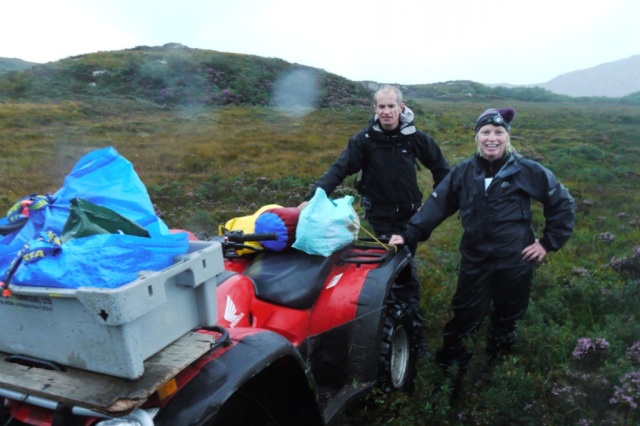 Heather and Duncan, happy to have landed

Back to Dry Harbour with their kit and the returned home to Rona Lodge, Now where was I? Oh yes, dinner and the other half of that bottle of red.

Just another day and yes John, you could not make this up!!!

I've been living on the island since April 2002, alone for the first 5 years, my partner L joined me in 2007. We manage the Island for a Danish family who bought the Island in the early 90's. Their hopes for the Island are to make it self sufficient supporting its inhabitants and that is where we come in. We look after the stock, 3 holiday cottages, machinery, boat and of course the visitors. It is pretty challenging but it is a beautiful place to live and work, we love it and strangely enough we love it even more in the depths of winter when all is quiet apart from the gales and rain. We do a bit of fishing, stock work, stalking deer and loads of other stuff. We have good support from lots of people whom we have met over the years and have become involved in the Island. Too many to mention here but keep an eye on the blog, they'll be there for sure in the future.
View all posts by Bill Cowie →
This entry was posted in Daily Doings, Kayaks, The Views and of course the weather. Bookmark the permalink.