The weather has been a bit iffy just now and the appointment at the Broadford hospital was quite important so I booked MV Spindrift to make sure I’d get there. Plus the delivery of the water tank and creel hauler bits were all Portree to-day. So 6.30am up and waiting for Kevin, I’d decided last night to put our boat on the mooring to make it easier to unload the tank and maybe some timber, much was my disappointment this morning when I went down to find Yacht Gem of Oban a few feet away from our mooring and his anchor all across the mooring gear.  I called Kevin on the VHF and he being an ex yachtsman said just put your boat out there, ‘it’s your mooring his boat is plastic and yours is aluminium’. So I did, just. If  a yacht over 30 ft had come in late it would  not have been able to pick it up. Needless to say this seems to be to common this year. Other yachts in the bay reported much swearing and noise from this yacht late on last night and we’re still waiting for our £1 for their visit onshore to peep through our windows at Rona Lodge. Obviously the crew thought I was away but L had a nice view of peeping tom yachties and a laugh when she opened the door to the peering Tom,  much hilarity. 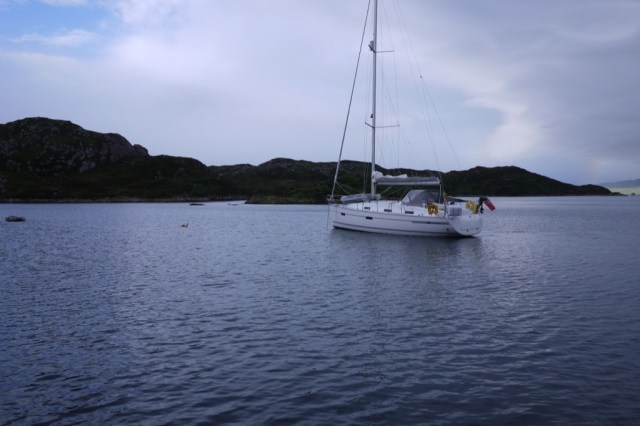 On a more positive note, the visit to the X Ray department reported that I still had a liver and it was working. Back to Portree and Kevin had loaded the wood and tank, the creel hauler bits had arrived and all that was left was a trip to the Post Office and high street of stuff and  for mail. The weather was foul and I bumped into my Sis’ Liz good to see her and get the news, it seems she doest phone me now, she just reads the blog!!! We left shortly after that and it  brightened as we headed for Rona. 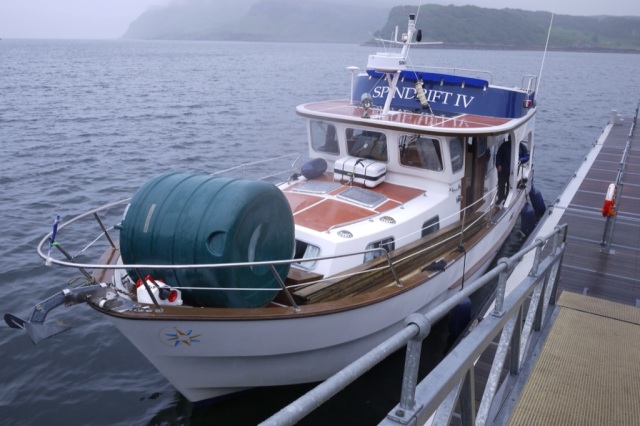 On our way back the pod of Dolphins that have taken up residence at the mouth of Portree harbour followed us again back up the Sound. It is always good to see them having such fun and off the front of the boat twisting to have a look at us.

Once we got back to Rona we unloaded into the aluminium boat, the Yacht Gem had departed, so nothing now to hinder us. A couple of hours later the tide had risen and I was able to lift everything off with the digger.

It was a good end to the day, the water in the well had risen a bit but the new tank will at last enable us to have some storage for future problems.

I hear someone nicked Paul Camilli’s camera off the ferry he works on so I’m off to read his blog for an update.

Have a look he’s my neighbour life at the end of the road.