Don’t Leave Home Without one.

Went out to check the creels this morning, first thing I saw was a Minke Whale and of course no camera. Typical, it was surfacing lots, even when the RIB from Gairloch went steaming past. They were looking West instead of East, better luck next time. Fishing was just on the off chance that a lobster was in the creels but the one I got was too small. It would have been nice to get a good sized one because we had our first Supper Club tonight. 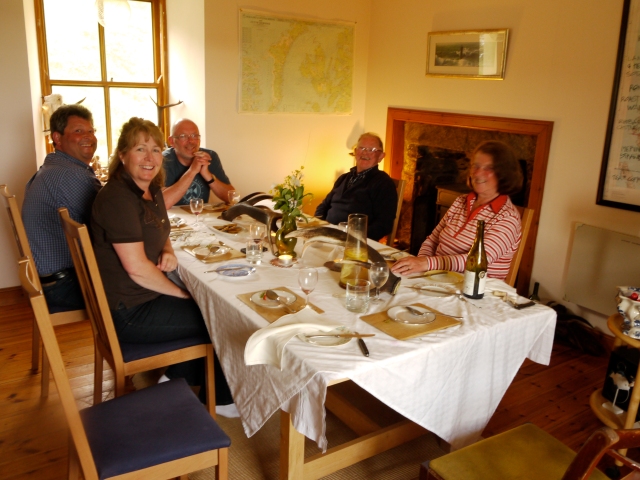 I think we had some satisfied customers tonight, even with  7 kayakers at the door, very nice guys n girls too, although the midgies saw them off. First rain for a while and a good hatching of the wee blighters took its toll. Shortly after that 3 yacht visitors rocked up looking for showers and they too were glad to be away from the midge. That took an hour out of our schedule but we got there in the end.

Cullen Skink with home made oatcakes

Langoustine, grilled with a beurre fondue, salad and soda bread

Meringue with strawberries and mint salsa

How’s that for a Wednesday night, exhausting I have to say!!

Steak plated up and ready to go.

Guess it is time to do the washing up..

I've been living on the island since April 2002, alone for the first 5 years, my partner L joined me in 2007. We manage the Island for a Danish family who bought the Island in the early 90's. Their hopes for the Island are to make it self sufficient supporting its inhabitants and that is where we come in. We look after the stock, 3 holiday cottages, machinery, boat and of course the visitors. It is pretty challenging but it is a beautiful place to live and work, we love it and strangely enough we love it even more in the depths of winter when all is quiet apart from the gales and rain. We do a bit of fishing, stock work, stalking deer and loads of other stuff. We have good support from lots of people whom we have met over the years and have become involved in the Island. Too many to mention here but keep an eye on the blog, they'll be there for sure in the future.
View all posts by Bill Cowie →
This entry was posted in Daily Doings, Kayaks, Wildlife, Yachties. Bookmark the permalink.