Hatty the terrier from the cottages survived the night, we think that she met an otter in the forest and the otter won. To-day she is pretty sore but perkier than she was last night, pictures tomorrow.

Kevin and Jean her owners have offered to help clean the bottom of the boat tomorrow, probably the worst maintenance job on the M V Rona so we’ll see them tomorrow, with Hatty we hope.

First thing this morning we had a visitor, I guess one swallow does not make a summer and this one was heard flapping in the window of the utility room, I think he was enjoying the view. It has been a very good spring on Rona for small birds, Redpolls, Wheatears, Sandpipers, Sheld Duck, long tailed tits, lots os sparrows and a host of others.

Kevin and Pam were here on Spindrift taking the honey moon couple over and Nicky and Ian away. The weather was stunning for them all. Later in the afternoon after finishing some jobs on the Wayfarer sailing dinghy, two yachts came in. 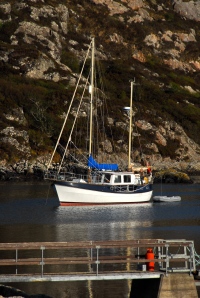 Motor sail yacht Taraka was first, don’t know the second one’s name yet, it was much later. Taraka had just enjoyed a sail from the Summer Isles and the skipper John was happy to be back on Rona, one of his favourite destinations. They would have enjoyed the late sun, it was the hottest day for quite some time.