Friday/to-day: Woke up smelling diesel engines at 4.00 am. Went to the loo and there was Portree lifeboat standing by, got dressed and headed down to the pontoon but the action was over I guess, here was the Stornoway yacht Rebecca that arrived on Wednesday night tied up to the pontoon. Obviously it had had a problem in the night and the lifeboat had to be called. It had shifted early evening into the gut at the NE corner of the bay. The wind picked up in the late afternoon and as has happened this season it was much stronger than forecast. I advised everyone I saw later on who came ashore to have sufficient chain out (not that I’m an expert, but I’ve seen quite a few dragging for the want of 5/10 metres of extra chain).

I’m just back from the shore (5am) and it is still a bit dark for photos and I can see that a few of the yachts have moved, whether the owners know I don’t know.

Thursday 26th: 13 Yachts in tonight, 16 at one stage but some left as others came in. Off to Portree 7am, going to the Doctor to find out what the chest pain was all about. Thankfully after a ECG and a chat with Doctor Chrichton I was pronounced fit enough to have a glass of wine with my dinner tonight. 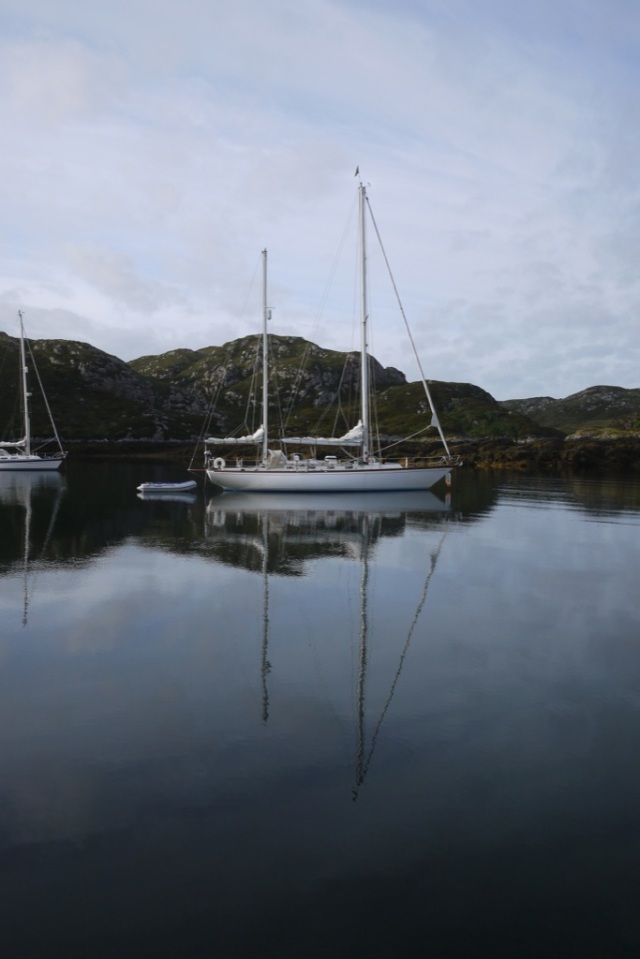 It was a beautiful flat calm sail to Portree but no wildlife apart from the usual birds. The sun was out and Portree was quite busy. Dan Corrigal helped load the boat and I asked him to find Simon, Raasay Engineerings number but just as he went off to find it Simon phoned, he was on Rona!! So an about turn and quickly home. On the way back I saw a Minke Whale and calf, just coming into the harbour an otter appeared in front of the boat.

I met Simon and his wife lynn, we had a quick lunch then Simon inspected my creel hauler, a very old MacLeod of Raasay model, but no trade for him to-day as he pronounced it fit for work but he was amused by the copper exhaust.

A steady stream of people were coming back and fore, our cottage guests were amused to see so many folk on a ‘remote’ island. Kevin and Pam arrived on the MV Spindrift with a private party to add to the melee. Just around 5 ish Ian from Yacvht Dragonfly appeared looking a little concerned, his wife Jo had gone for a walk before lunch and had failed to return. He was concerned as she had no communications and had said she was only going to Dry Harbour which is 30 minutes away. So off we set with a search party growing as we went along, Dave and Sam from the cottages helped but just as the were setting off from their cottage an exhausted Jo came up from the West shore. It seems she had got disorientated and followed some posts to the lighthouse, then went down the East coast, crossed over to the west coast, back up to the NW corner then followed the West coast back till she found Dry Harbour. A relieved Ian gave her a telling off but she was pretty exhausted. Jo is not the first to get lost and she was more annoyed with herself for not taking a map or compass.

An Exhausted Jo arriving back at Big Harbour

Very late I got my glass of wine!